If you were a telecom company, you would realize that there isn’t going to be a lot of movement in voice now. This is because almost all people have mobile phones.

The next big challenge is the internet. Future lies in using data on your mobile phones. Hence, the smartest move now is to invest in building your infrastructure for the future.

Here is why nothing else matters –

If any company manages to capture the data penetration in India, they virtually own the telecom sector in the entire country.

Reliance Jio is currently the most suitable contender in the race.

What Exactly is Different About Jio?

The biggest difference between other telecom operators and Jio is their optical fiber network. An optical fiber is a wire that converts your data signal into light and transfers them at the speed of light. You know that light is the fastest thing in the universe.

Reliance Jio has the longest fiber-optic network in the country, ranging over 2.5 lakh kilometers of fiber. Someone made this map of the Jio network showing the coverage – 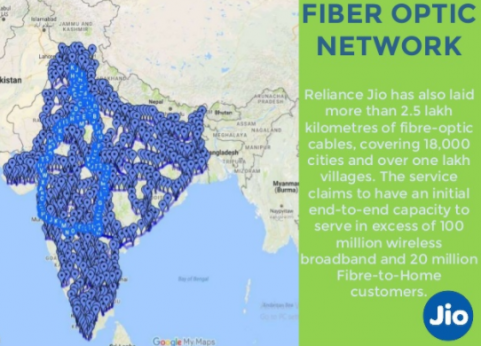 Now, laying down that kind of fiber optics network is not a joke. It requires money.

Also Read: How Mukesh Ambani’s Reliance Jio Fooled us in the Name of Cheaper Data

How much money has Jio invested?

Put this in perspective – this is more than two times the combined investment of Airtel, Idea, and Vodafone in the 4G segment (and remember that most of the other investments are not even complete as of now).

Now, if you are investing such a huge sum of money into the market – 4G market – which is still untested in India, how are you expecting to earn the profit?

In other words, how exactly will they get back those ₹ 150,000 Crores?

This is actually a very calculated risk that they are taking. Here is the approach:

Once you have already laid down the fiber-optic network, the cost of operating it is not very huge. On the contrary, you can operate the network at a minimal cost. Therefore, the only focus is to get more internet users.

If you look at the tariff plan, you will notice that it conforms to the above ideology. They are not charging for the voice calls because they don’t care about voice. In fact, not charging for voice will attract more people towards Jio. After that, they can showcase their data capability.

Their network is capable enough to handle amazing internet speeds. It, therefore, encourages the users to use the internet instead.

What happens when you get hooked on to mobile internet? You basically kill the entire market of your competitors. This is because you have rendered them completely useless (recall that with good data, you don’t need SMS and phone calls – everything can be done through the internet).

How many subscribers do they need?

They are charging about ₹ 70 per GB of data. Let us assume that their contribution (profit before fixed cost) is ₹ 50 per GB of data. (Even this is on the lower side; per GB cost is actually going to be lesser).

If you do the math, you will be able to realise that if 30% of people in India use 2 GB internet per month, then he can recover the initial investment in 3 years.

Actually, Mukesh Ambani thinks he can capture 90% of the country by next year.

So, my calculations are actually quite conservative on that front.

Yes, it is possible that they earn money out of this.

The whole master plan is based on one single thing: volume.

Right now, they just need the numbers. If they can manage the numbers, as high as possible, they will pull it through. Can they manage to increase the subscribers?

Considering the technological backbone and the cheap data prices, the correct question to ask is – why not?