Google is planning on a major update in the coming weeks introducing a new “Confidential Mode” along with updates on new features as well as designs.Though an official confirmation from Google is awaited, information related to the same has been obtained from various sources.

The new update will bring in an umbrella of features such as quick reply to emails, ability to snooze emails for later, a new sidebar that would allow placing calendar appointments side by side. 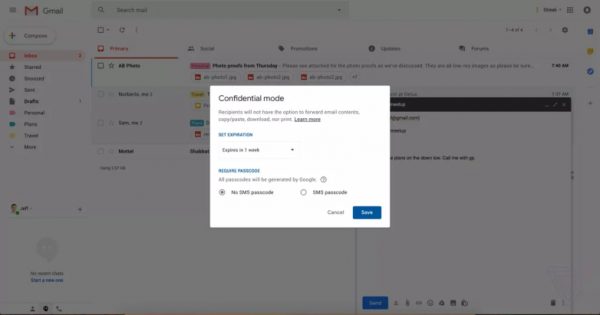 The much talked about “Confidential mode”, will allow Gmail users to restrict users from accessing email, stopping copy, forward or printing the content of email altogether.

Google is also working on an email authentication feature that will prompt users to enter an SMS passcode in order to open the email and even set an expiry date on the email that they have already sent.

All these new features will enable users to have a more robust control over who sees their email and how the contents of the email get distributed. Though this will not be able to stop the misuse of a user’s email account, yet it would prove efficient in warning the user of any malicious or third-party misuse.

Google hasn’t officially confirmed to the news, yet inside sources have revealed that a major update is being planned upon, which should be ready for rollout in the coming weeks. Moreover, with Google’s I/O Developer scheduled to start 8 May this year, we can likely expect the new Gmail design to be showcased at the event.

What Is Endpoint Security For Your Business?