Disclaimer: The facts and incidents mentioned in the story have been already published by other media companies. We are just distributing the content supplied by third parties or subscribers. . Neither the Company nor any third-party provider of information guarantees the accuracy, completeness, or usefulness of any content, nor its merchantability or fitness for any particular purpose. We don’t intend to provide any opinion on the matter.

It was just another evening in a Mayur Vihar’s small apartment of Rishi Pratim Mukherjee. He was hanging out with two co-workers, Sriparna Tikekar and Sattvik Mishra from WebChutney, an Indian webdesign and online marketing company.

A little drunk and a discussion over “listicles” the term coined because of the popular US-based internet content and entertainment company, BuzzFeed escalated. Listicles are the articles in the form of lists of multimedia (images, gifs or short videos) with minimal words and is shared online. These “listicles” are often funny or point out some social problems in a humorous way.

At some point during the drunk evening, Mishra, Tikekar and Mukherjee began discussing how hard could it really be to create such “listicles”. This led to creation of a blog and a listicle was created, which read: “These pictures from a Hindu lesbian wedding would make you go all aww.”

The following morning they woke up to over half-a-million post views and that’s how they started ‘Scoop Whoop’.

Everything was on track

The articles of Scoop Whoop started hitting million hits and in a time span of barely 16 months, it raised its seed funding of Rs 10 crore from Bharti Softbank, valuing the company at Rs 40 crore. By November, 2014 the website was receiving over 21 million monthly sessions and attracted $4 million in last round of funding from Kalaari Capital.

Scoop Whoop even received praise from BuzzFeed’s Editor in chief who tweeted “my actual fav is scoopwhoop.com”.

Scoop Whoop had done the launch right. Doing it before BuzzFeed came up with their Indian edition, gave it an early market. By then, Scoop Whoop had already published dozens of articles which were pretty viral. Among these were “14 Indian Politicians Who’ll Find Their Counterparts In Game Of Thrones,”“20 Bengali sweet dishes you have to try once in your life,” “These Bruised Up Pictures Of Indian Goddesses Have A Point To Prove” which showcased Indian models dressed up as Hindu Goddesses but with bruised faces, as an attempt to highlight domestic violence. The images used were taken from Taproot India, a Mumbai-based advertising agency, which was not given any credits at all at the time of post publish.

This was the Scoop Whoop’s first failure which was repeated for quite a number of times where the company didn’t attribute sources.

The meteoric rise of Scoop Whoop started taking a fall when similar websites like Wittyfeed and Storypick launched in India, whose contents were fresh and diversified. Scoop Whoop sooner realized that they need to diversify the content and be more than just a “viral content company.”

The hustle became even more steep when big Indian media houses like Times Group and NDTV launched their own listicle sections. Soon the company that was ranked under top 20 Indian websites, was seen nowhere even in the 500s.

The other important thing that Scoop Whoop chose to walk upon was giving proper credits. They were often seen using random images by merely downloading them over the internet while advising other Facebook pages to remove the meme they posted, claiming it to be Scoop Whoop’s property, a financial daily earlier reported.

One such template that Scoop Whoop shared, claiming to be its own was created by some other random user. Below is the meme that was put in question: 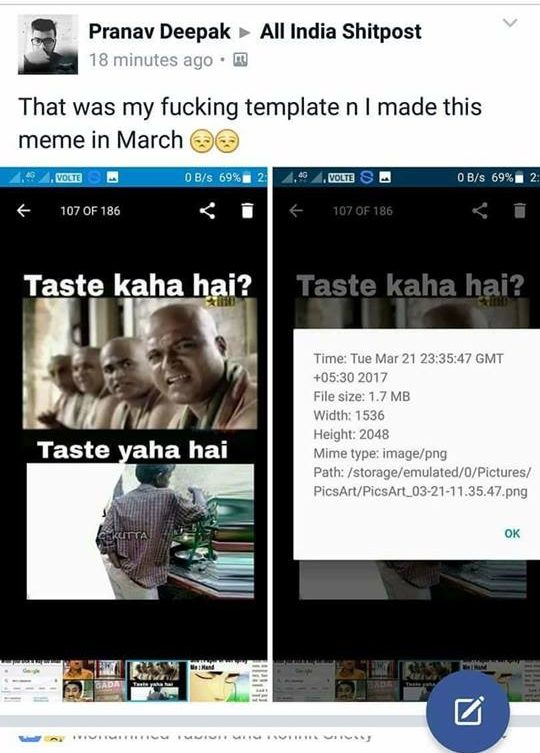 Soon, threads on networking sites such as Reddit sprang up, with a dozen screenshots of instances wherein ScoopWhoop had reused material previously used by another page on the internet. A user claimed that it was plagiarism, he already posted this template.

In a world of memes, it involves a large number of reuse and repurposing of clips, images, gifs and even ideas. It is hence very hard to draw a line between who owns what?

Although Scoop Whoop won this battle, but it did lose many readers, most of whom were outraged because Scoop Whoop was reported deleting user comments and banning people who protest against it. The angry mob even turned to Google Play Store where it rated the app 1 star and the overall rating fell to 1.2. Currently the app has 3.2 user review rating. 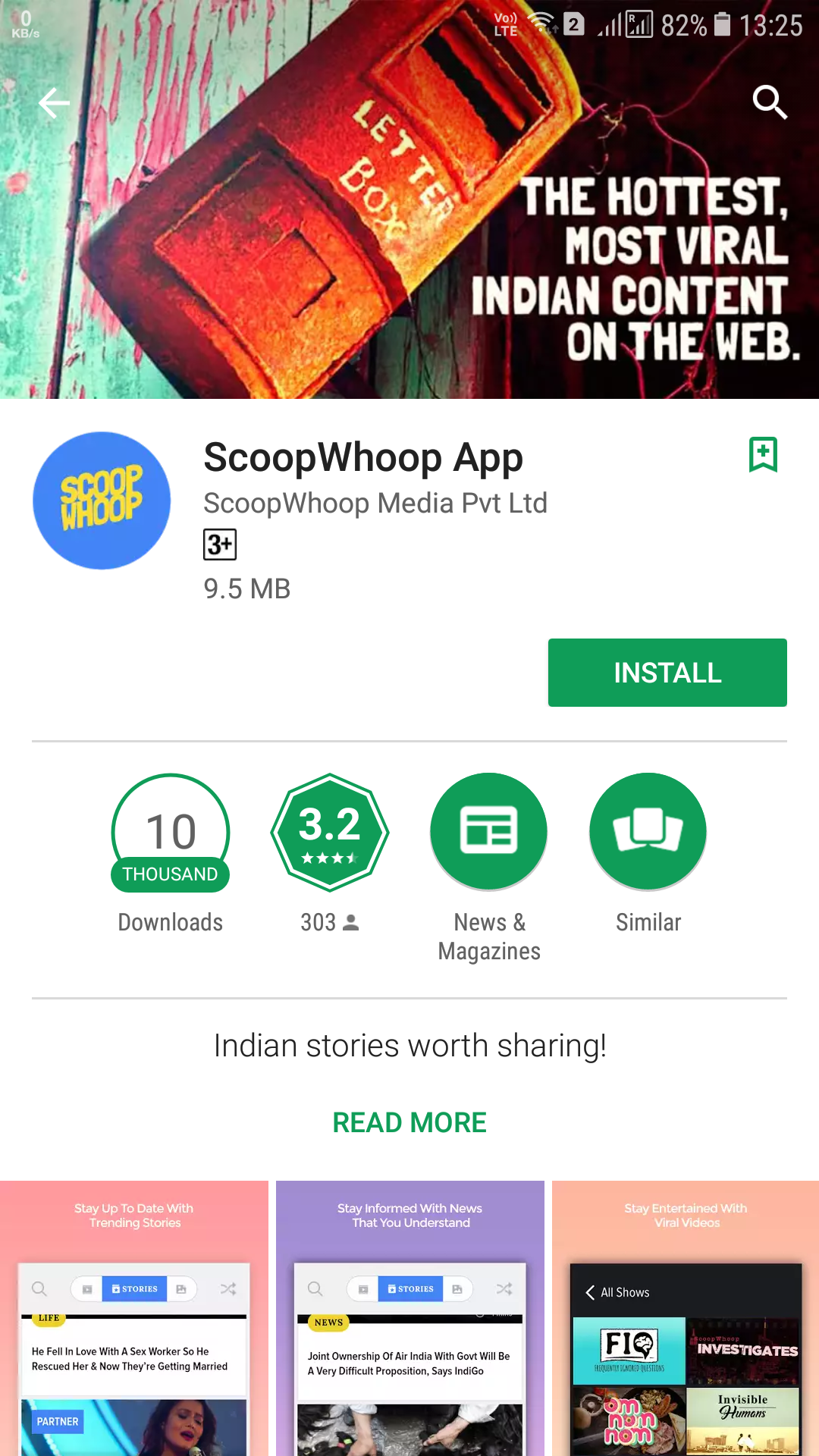 “However, we were not responsible for Facebook banning their page. It was banned because it violated Facebook’s guidelines.” Mishra told a financial daily in an interview.

Another spot where Scoop Whoop felt helpless was the constant ethnic violations by the website. A Scoop Whoop employee, Jaiman left the company and in her resignation letter she wrote,”How is it okay to use images without permissions, how is it okay to not source back? How are there spelling mistakes in every second story that is being published by main? How is okay to duplicate stories day in and out and then run them on an FB page that has a whopping number of readers, to compare with stories that barely make it to that page?”

She even pointed that Scoop Whoop lacked leadership and the way it dealt allegations was horrendous. She even questioned the way how a sexual harassment complaint against one of the co-founders was handled. In April 2017, a portal-Catch News reported that a former employee of the company had filed an FIR with the Delhi police, in which she alleged that she had been sexually harassed by Suparn Pandey while working for ScoopWhoop. The FIR states that the complainant’s ordeal lasted throughout her tenure at the company.

The last and the most important point that Scoop Whoop often fails to realize its capabilities. It somewhere lacks a vision and how it’s going to deal with the ongoing difficulties is unclear.

Even its former employees think that the company “seems to be walking from one crisis to the next.” Scoop Whoop is one of the most popular company to have lost its way to a bigger success.