The phenomena of Indian’s making it to the top positions in big US companies is not something new. However, the trend has lately made neighbour country China too anxious. While China is too competent when it comes to exposure to western education or native talent, yet statistics reveal a different story.

According to a report, about 350,755 Chinese students enrolled in American universities in the academic year 2016-17 when compared against 185,000 Indian students.

Sundar Pichai, who was born in Tamil Nadu, India, was appointed CEO of Google in August 2015, while Satya Nadella, who was born in Telangana, India, became Microsoft’s CEO in 2014. In addition to those two representatives, the CEOs of SanDisk, Adobe Systems, PepsiCo, Harman International and Cognizant are all of the Indian origins. By contrast, there are barely any CEOs of large companies in the US who originate from the Chinese mainland. So why are so many Indians becoming CEOs of multinational companies, while businesspeople from the Chinese mainland lag behind?

Indian’s climbing the top ladder in Big American companies is not a success on the personal front, but also reflective of enormous power that the country holds. A Nadella or Pichai would definitely add-on to an impressive image in the Silicon Valley, making the country altogether more attractive for US tech business.

So What could have been a reason for such disparity? In an attempt to discover the same, Global Times spoke with two industry leaders- one Indian and one Chinese.

According to them, India’s rich diversity and language versatility makes it easier for Indians to learn and adapt to different cultures, while in the case of Chinese, they prefer coming back to their homeland to serve Chinese economy after completing education in the US. 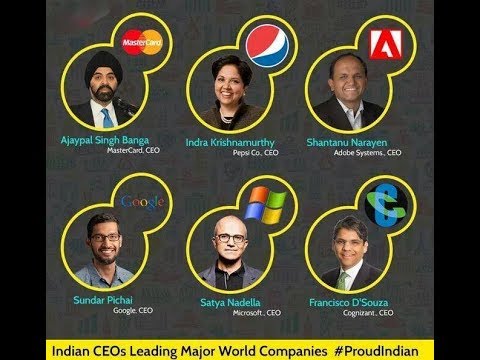 Indians start as Engineers then move to larger Business Roles

Interestingly, explaining the phenomena with a more clarity Chris Dong, global research director at technology advisory firm IDC China says, Most Indians at US high-tech firms seem to follow the same career path: They start as an engineer and then manage products. It’s crucial for those who wish to pursue high-level management posts, as rotations in different product or business units help one better understand the firm’s strategies and operations.

Referring to Global Times Article if we take the example of Google’s CEO Sunder Pichai- Before joining Google, he served as the vice president of product management in Applied Materials Inc. and management consultancy McKinskey & Co. While Chinese mostly prefer to embark a career path along the technical landscape.

Dong also pointed out a key factor in US’s recognition in discovering Indian’s talent is also instrumental in making them acquire senior roles in companies. Additionally, foreign companies too are willing to set their R&D centres in India which further helps in nurturing global and high-end talent.