India-born Google CEO Sundar Pichai on Thursday took to YouTube to back Prime Minister of India, Narendra Modi’s ‘Digital India’ campaign focused on connecting 1.2 billion people in the country and said his company would play its part in supporting the initiative.

“There is tremendous excitement among Googlers, Indians in US for PM Modi’s visit,” Pichai said, welcoming Modi to the Silicon Valley. 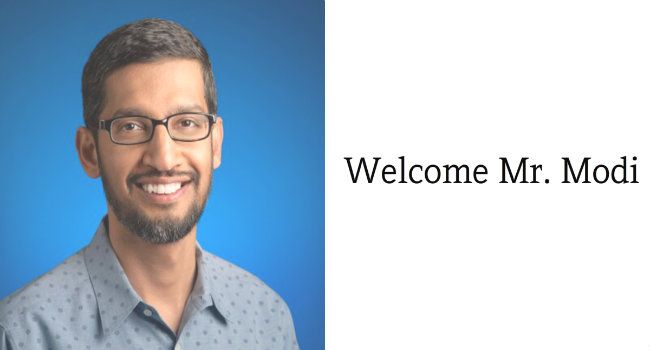 “It is an honour to welcome PM Narendra Modi to Silicon Valley this weekend,” the 43-year-old IIT alumnus said, adding “I hope PM Modi’s visit will energise people in the Silicon Valley.”

“The bond between India and the Silicon Valley is strong. India has long been an exporter of talent to tech companies.

The products built by Indian graduates from IIT and other institutions have helped revolutionise the world. But it is India that’s now undergoing its own revolution,” he said, adding Prime Minister Modi’s ‘Digital India’ campaign is central to this revolution.

“It focuses on connecting the 1.2 billion people in India. It has received tremendous support in India and in Silicon Valley,” Pichai, who became the CEO of the internet search giant in August, said.

He said Google will play its part in the programme.

“There is no more important role for tech companies today than helping to connect the next billion users,” said Pichai.

“Some of the initiatives we are working on…making our products work on low bandwidth, and even offline. Make the web accessible in indic languages, providing low cost Chromebooks to Indian schools and investing in core infrastructure and affordable smartphones with Android One,” he said.

During his visit to Silicon Valley, Modi is scheduled to meet Pichai, Facebook CEO Mark Zuckerberg and Apple CEO Tim Cook, among others.