Telangana Governor ESL Narasimhan and Chief Minister K Chandrasekhar Rao will also attend the event. The inauguration was originally scheduled on September 7 but had to be postponed due to non-availability of Tata.

The first phase has come up at the International Institute of Information Technology (IIIT).

The facility is being set up in collaboration with IIIT Hyderabad, the Indian School of Business (ISB) and the NALSAR University of Law. 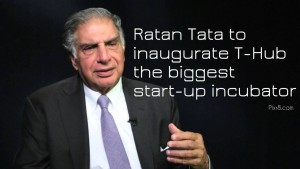 While NALSAR would help in intellectual property and related areas, ISB and IIIT would provide business mentoring and technology mentoring respectively.

The second phase will come up on three acres of land in Raidurgam near Hitec City, the IT hub.

The government promises that it will be an incubator of incubators, offering start-up environment available in the west.

The facility will also have venture capitalists and angel investors.

The government is also planning a venture capital fund. Officials said they were in discussion with various venture fund groups.