Indian exports of goods and services, as a percentage of GDP in the September 2017 quarter, was lower than that of September 2005.

US President Donald Trump has menaced to impose reciprocal tariffs on Indian goods, if the government refuse to lower duties on American exports. If the threat is put into practice, it will aggravate an already problematic situation for Indian exports.

The best way to illustrate the gravity of this problem is when we realize that the gross domestic product (GDP) in September 2017 quarter was lower than the September quarter of 2005, already 12 years ago. 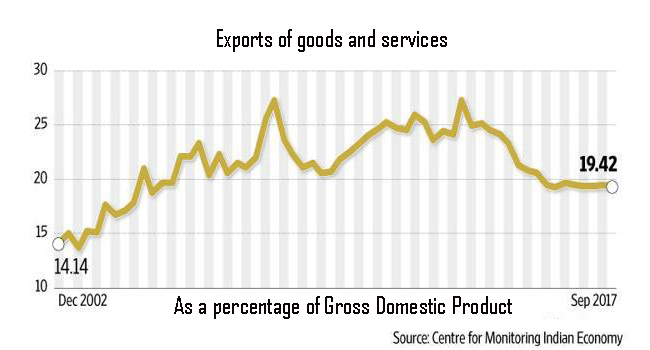 The Indian exports of goods and services as a percentage of GDP was on a steady rise during the last boom until the September 2008 quarter.

Exports were on the rise, significantly contributing to the high growth rates realized by the Indian economy during that time.

Due to the financial crisis in 2008, India’s exports/GDP ratio plunged drastically before eventually recovering in 2010-13, until it again plummeted. Since December 2015 quarter, the GDP of India was rising and falling around 19.5%, which was nothing compared to the 27.27% of GDP achieved in the September 2013 quarter.

The last GDP estimates reveal that exports have gone on the rise by 6.3% at the current prices in the December 2017 quarter, which is far below the current growth of 11.9% at current prices. This indicates the exports to GDP ratio is on a steady decline.

On the other hand, the International Monetary Fund (IMF) data for emerging or developing Asia suggests that the volume of export of goods and services has been on the rise in Asia between 2016 and 2017, however, these data are not valid for Indian exports.

“The international competitiveness of manufacturing has not made great strides, reflected in the declining manufacturing export-GDP ratio and manufacturing trade balance,” suggested an Economic Survey. This suggests that the Indian industry might not be as competitive as many would believe it is. It also reflects that it is mandatory to address exporters’ worries concerning the implementation of the goods and services tax.

The survey also suggests that the biggest force of India in turning this situation around lies in exports.

“If the relationship between India’s exports and world growth returns to that in the boom phase, and if world growth in 2018 is as projected by the IMF, then that could add another 0.5 percentage point to growth,” it said. However, if a trade wars really happen, we would see our GDP falling drastically instead.