Market Intelligence Company Canalys has demoted Apple Smartphone sales in China as a part of “Others category” sharply in contrast from the 2015 peak where its market share was somewhere between 40-50% range in Urban China.

Many noted analysts have expressed concern over Apple’s plunge in Chinese market including Katy Huberty of Morgan Stanley predicting it as ‘continued weakness in China’. She predicts that the iPhone maker’s market share in China might be as low as 18%.

“Apple has always been limited to targeting customers in the so-called Tier 1 and Tier 2 cities- larger urban areas with a relatively well-off population.The Cupertino company’s problem in China is two-fold”, says the analyst. 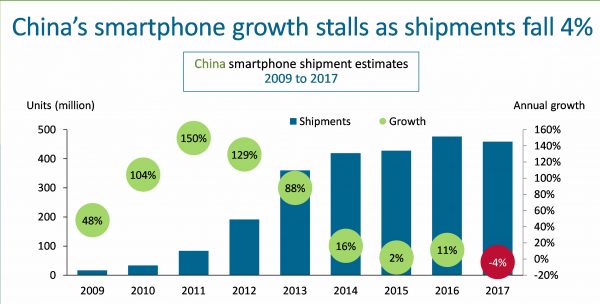 From a broader perspective, China’s current population today stands at 1.3 billion out of which tier-1 and tier-2 together make up only 2-300M people. And out of these, only 150-220M can afford to have an iPhone.

Secondly, while the smartphone market is still large, local models have increasingly covered Apple both in terms of design and features, giving Apple a very meager share in the Chinese market.

Analysts are doubtful that the country would ever return back to its 2015 peak as the present scenario is flooding with local brands.

The upgrade cycles have lengthened and a flattish market is also being forecast given the few points of growth depending on the overall market and product cycle. While at its peak Apple had a 40-50% share in 2015, it has today considerably gone down to 20-30%

Homegrown brands like Oppo, Xiomi, Vivo, Huawei, now dominate Chinese sales with even premium buyers no longer seeing them as significantly inferior to Apple and Samsung.