Economists from all over the world are busy speculating the consequences of a full-blown trade war and how it will affect the overall economy.Meanwhile, global tensions have been continuously escalating amidst impending trade war between US and China. 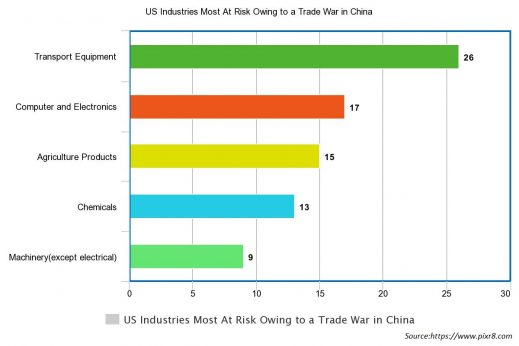 U.S Sectors Likely to get most affected by Trade War

While, it is not clear if these ‘tit for tat’ tariff proposals will actually be imposed, it would nevertheless bring in a great impact for economies of both the countries.

Increased trade regulations will also act detrimental to other countries trade while China, Mexico, and Canada markets are going to be directly affected by US tariffs.

While classifying countries on the basis of exact impact are difficult, classification of countries based on the percentage of GDP that comes from export to US and stock market exposure to the U.S, a list of countries most likely to get affected is as follows:

A direct impact of recently announced tariffs over economy seem small.But, a further rise in protectionism will acts as a downside risk for growth and an upside risk for inflation.

While Citi analysts are worried about trade tightening rules that would influence macro economies, they don’t see the probability of a fully blown out trade war to materialise in reality.