Mukesh Ambani, the chairman of Reliance Industries Ltd, at the Annual General Meeting in Mumbai, launched the Jio Phone 2 and announced that the device will be priced at Rs 2,999. Also, the chairman came up with a new offer under which the users can exchange their old feature phone for a new Jio Phone by just paying Rs 501.

The QWERTY phone will be available for sale from August 15th at an introductory price of Rs 2,999. It will have extra features like Whatsapp, Facebook and Youtube.

“Under this offer, by exchanging your old feature phone, you can get a brand new Jio Phone for an effective entry price of just Rs 501.”

“Starting 15th August, we have another exciting offer for common Indians. They can purchase our Jio Phone 2 at an introductory price of only Rs 2,999.”

The specifications of Reliance Jio Phone 2 are as follows:

– It has dual SIM card slots.

– It operates on KaiOS operating system.

– The internal storage is 4GB (expandable with the help of SD card).

– The rear camera is a basic 2MP one, while the front camera is VGA.

– The phone will be capable of functionalities of FM, Wi-Fi, GPS and NFC.

– It has a four-way navigation key and a dedicated button for voice command. 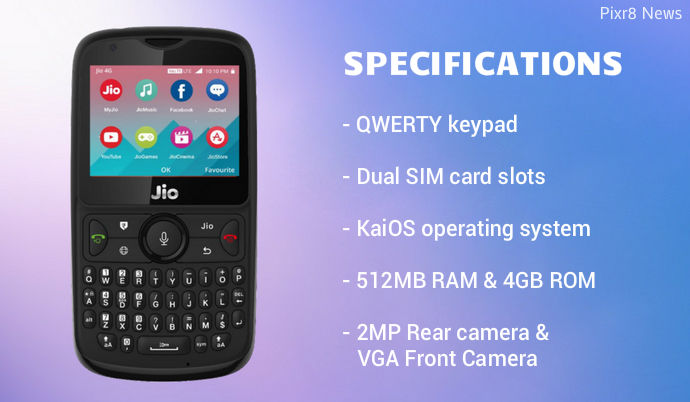 Mukesh Ambani has a target to gather around 100 million Jio Phone users in the “shortest possible time”. So far, the major disadvantage of Jio Phone has been the inability to access mobile applications like WhatsApp, Facebook and YouTube, but now all these features have been added in the new version.

“With the added functionalities, our wider network reach across India and strong retail presence across India, the goal that I have now set for our Jio team is to enable 100 million users on this Jio Phone platform in the shortest possible time,” Ambani said.

Ambani said that 500 million Indians still use the feature phones without internet capabilities. With the additional features in the new Jio Phone, the number of Jio users is expected to grow even more. The company already has 25 million Jio Phone users in the country.

According to the chairman, Jio is on the path to great success and will expectedly achieve the target of 99% population coverage with 4G-LTE. And this will make sure that they have their existence in almost every place in India, be it a district or a village.

5 Data Analytics Trends That Will Define the Decade

How to Protect Your Small Business from Cyber Threats