The global electronics company Oppo launched its latest smartphone under the name ‘Find X’. The smartphone maker has launched a number of unique and highly attractive Android power smartphones in the past and now, it has launch the camera slider phone Find X.

The company claims that “Oppo Find X is the world’s first panoramic designed phone, embracing the beauty of nature into a leading technology product”. To create a flow like gradient effect, the company has used an innovative multifaceted color process due to which the phone shines gracefully at different angles.

The smartphone is powered by an octa-core Snapdragon 845 chipset and 8GB of RAM and 256GB of internal storage, which will be based on Android Oreo.  Since Oppo manufactures camera-centric smartphones, the company has given special importance to the camera part.

The new Oppo smartphone priced at 59,990 in India. The phone has premium and luxury looks and has a metallic body. Apart from this, the device sports face, unlock feature but no fingerprint feature available. The phone introduced in two color variants that are Bordeaux Red and Glacier Blue. 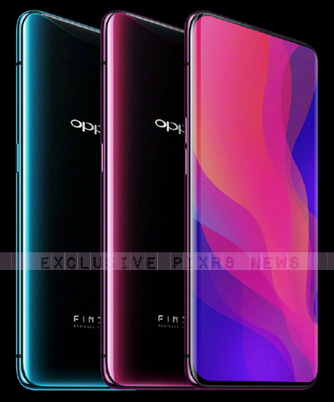 The device will come up with a fascinating 3D pop-up camera module which may be an interesting feature for the picture freak people. The users can easily raise the front and back cameras whenever they need to be used. The phone also has a 3D face recognition system created from 15,000 facial dot recognition and intelligent analysis. It might be interesting to see whether the motorized mechanism for camera be successful or not.

The Chinese company is accelerating up to give a tough fight to the predominant smartphone brands in the world. It seems that the company is trying to reach the top through the latest smartphone which is expecting to be highly priced giving a fight to Apple, Samsung and OnePlus in terms of the price range. However, it is still unsure whether the smartphone will prove to be a success or not.

The new camera and display features are all fine but we personally feel that such a high priced product may not attract a good number of buyers when they have other predominant brands in competition. The Chinese companies such as Xiaomi, Oppo and Redmi have successfully -captured 70-80% of the Indian market if we talk about the smartphones ranging between Rs 10K-20K. Redmi also has recently launched a smartphone in the range of Rs 35K. But, will these Chinese companies be able to mark its footsteps in the market for the smartphones ranging between Rs 30K-1Lac? The company might take a few years to create a mark on people’s mind such as Apple and Samsung that are known for their unique operating systems and quality.