The electrically powered Ehang 184, unveiled at the 2016 Consumer Electronics Show in Las Vegas, can carry a single passenger weighing up to 100 kg for a 23-minute flight at sea level at a speed of 100 km per hour, the company said.

After setting a flight plan, passengers only need to send two commands: “take off” and “land,” each controlled by a single click on an accompanying tablet, it said. There’s no need for a runway because the drone takes off and lands vertically.

“Due to the 184’s fully automated navigation, made possible by Ehang’s 24/7, real-time flight command center, passengers have no need for a pilot’s license — they simply sit back and let the drone take over from there,” the Guangzhou-based company said in a statement.

“This first realization of automated flight signifies a major turning point not only for the transportation industry but also for a huge swath of other fields such as shipping, medical care, and retail,” said the statement.

As to safety, Ehang said the drone has built in reinforcements for all flight systems, so that in the unlikely event that a component does fail, backups can seamlessly take over. 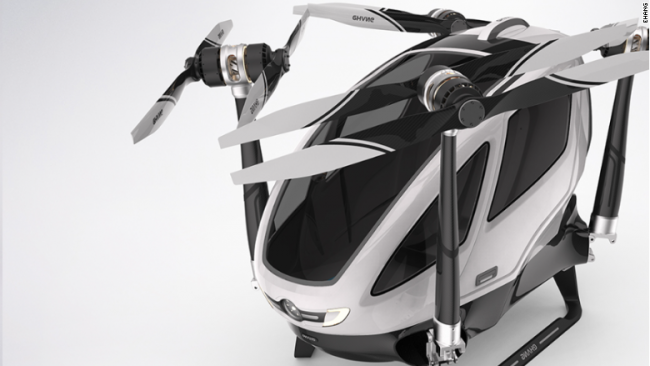 If there’s damage during a flight, for example, from a bird, the drone will automatically determine whether it will need to land to ensure its passenger’s safety. In the event of an emergency, passengers can also choose to halt flight and simply hover in the air with just one click.

In addition, while the drone is able to fly during thunderstorms and other extreme weather conditions, Ehang’s real-time flight command center can prohibit it from taking off as a precaution.

Derrick Xiong, Ehang co-founder and chief marketing officer, told Xinhua that his company plans to sell the drone later this year at a price of 200,000 to 300,000 U.S. dollars per unit, but acknowledged that it initially may be only used in designated places such as tourist areas.

“But in the end, we hope people can use it as a means of transport for short-to-medium-distance travel,” he said.

Currently, there are no regulations that apply to such products because it represents an entirely new category of technology.

“We are in uncharted waters, and are working closely with government agencies across the planet to develop and regulate the future of transportation,” Ehang said.

Why Am I Getting So Many Emails?

Tesla to recall Made in China Cars over Safety Issues