[dropcap]A[/dropcap] Twitter employee on November 2nd temporarily deactivated US President Donald Trump’s Twitter account @realdonaldtrump for 11 minutes. After reporting as an error by Twitter, it said that it was an action carried out by a Twitter employee who was on his last day in the company. 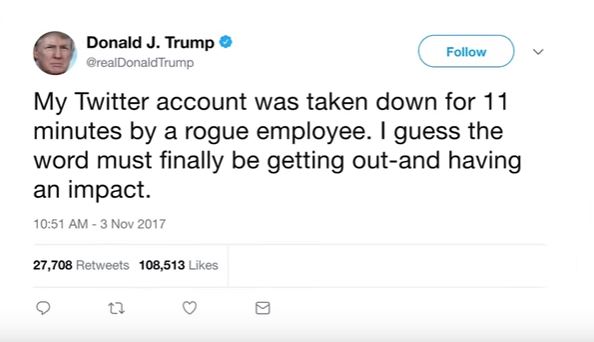 After a global hunt by media persons, he was finally revealed to TechCrunch in an exclusive interview.

His name is Bahtiyar Duysak, a citizen of Germany and worked for Twitter’s Trust and Safety Operations teajm as a contractor with a firm named Pro Unlimited in San Francisco area. He was on the job for four months.

Is he looking for attention?

Duysak could have stayed low, but he chose not to! Then one might wonder that he is looking for attention and intends to take credit for the same. Or hey! even get nominated for Nobel Peace prize.

Save this image & send tweet it to Trump 24/7 Then nominate that Twitter employee for a Nobel Peace Prize ✌️
“And the world will be as one” pic.twitter.com/7H2FuYlCJ0

Well, he is not out to claim any such titles but to clear things and blow away the dark clouds that may be wandering on his career.

He even had to shut off his phone since Nov 3rd to stay low. He said that it was just a “series of coincidences” that led to the deactivation of Donald Trump’s account.

“I didn’t hack anyone. I didn’t do anything that I was not authorized to do,” he told us when we met in Germany. “I didn’t go to any site I was not supposed to go to. I didn’t break any rules.”

The media seems to be more aggressive on the issue, tearing apart the social life of this poor chap, What he describes as just a “mistake” seems too much for him.

Just check out what he said: