Starting out with his conversation and speaking to an audience of students and to be entrepreneurs at the opening of the Foundry startup hub in Oxford, UK, Cook talked about his early life and what are the key elements to succeed as a CEO and as an entrepreneur.

Back when Tim Cook was 21(1988), he says “I wanted to find a job that I loved and I wanted to love the work I did.” Having grown up in a “very lower middle-class family” and watching his father working a “blue-collared job” for his family and not doing the thing he would love.

Soon after his undergraduate school Tim realized that “the purpose of life is not to love your job. It was to serve humanity in a broad way and the outcome of that would mean that you would love your job.”

He also says that “after joining Apple, I realised that my values and my work aligned” with Steve Jobs purpose.

When asked about why he joined Apple, even after it was declining its pace then, having dropped its sales from 11 billion to 6 billion and how did he take this “leap”. 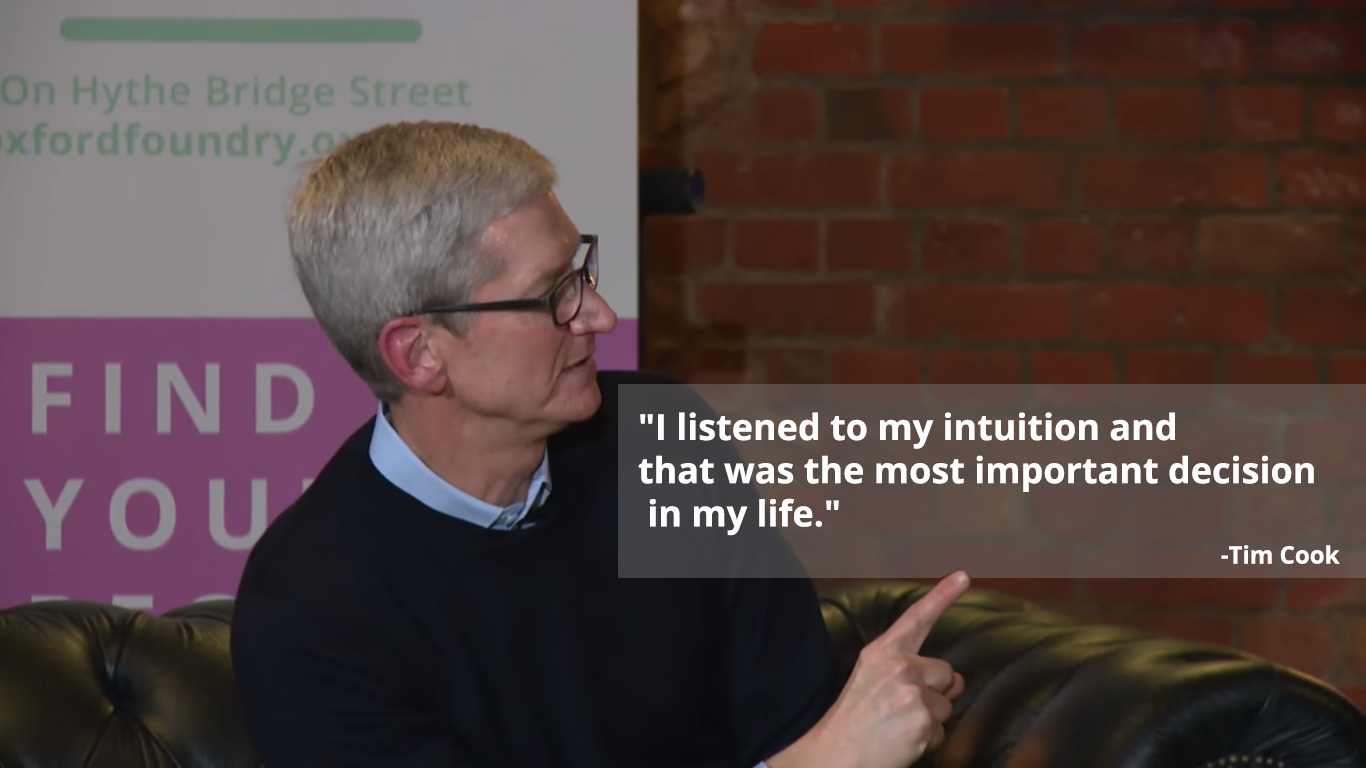 Cook also talked about the key elements a growing business or an entrepreneur should focus upon:

“If you are an engineer make sure you recruit a friend from the liberal arts. Find people that are different from you! If you’re from the UK make sure you get someone from the Middle East or from China… or wherever”

“In addition to that — because we do make mistakes on some things that we ship — and so you always want to stay close to your customers and listen to them and be very accessible to them,” he said

He also focused on the way budding entrepreneurs should deal with his/her failure. Instead of considering them as failure, one must think of it as “things you learned”

If someone is looking for inspiration, one should know how Cook gets it. He likes to meet artists, people who are already using Apple’s product. He says,” I like to meet the doctor who is using our product, musicians who use Apple tools to create music.”

“Allow different opinions; not only allow but foster them and that’s how all of us get better!”

Tesla Fired Hundreds of Employees in Past Week

Founder and Chairman of Apple’s Top Chipmaker Announces His Retirement

“Leadership is drawing out people, because it’s the combination of people that amplify performance.None of us have an ‘S’ on our chest and a cape on our back. The only way is to succeed is to collectively do our best work and amplify each other. Leadership is that ‘amplification’.”

During the Q&A Session, when asked how entrepreneurs should handle investors who seem to be trying to steer them towards a quick exit to a tech giant like Apple or Google, he said:

“If you have a VC asking you that, you should get up and walk out to the road,” said Cook.

“You should not be attracted to that kind of money because those people are not for growing your company and helping you, they are there for a quick buck and it’s not worth it.”

A final question raised monopolies and how dominant elements in markets might be blocking entrepreneurs — and what could be done to help?

“I’m not a big fan of regulation but when there’s any move at all towards that side I think that regulation is necessary,” said Cook.

“For us we have low marketshare, we’re about the best, not the most. But I think it’s essential that competitive markets exist. And where it doesn’t I think that is a prime role for government to step in and not only protect the consumer but also protect society at large because sometimes it can be more than about the price somebody pays for something. Sometimes that can be the least issue.”

“You’re asking a huge question that’s obviously on a lot of people’s minds right now, me included,” he added. “The regulators have to decide where in that spectrum are different companies. Each company’s in a different position so each one has to be looked at individually, instead of as a group.”

How to Build Your Small Business From Scratch