“Hey, are you watching the match right now?” said Sahil from Delhi to one of his best friends Shreya who lives in Infosys campus, Mysore. “yeah, I am, excited for last over after this coke commercial!” Shreya replied.

Yes, it is possible to see two different ads while watching the same channel at the same time in different locations. Amagi Media LAbs, a Bengaluru-based tech media firm, which is considered as country’s largest TV ad network, is taking Geo-targeted advertisement concept to another level.

When an ad is broadcasted on a national channel it is shown to the whole of the country. So if a local businessman having a targeted customer in a specific area is paying for the ad , the amount of advantage gained is very less as compared to the money invested in for the advertisement.

To make the distribution of advantage balanced, a team of three IIM-Bangalore alumnus, KA Srinivasan, Baskar Subramanian and Srividhya Srinivasan came up with an idea of Amagi Media Labs in 2008, that can make the advertisement more affordable for small and medium level enterprises.

“The idea behind floating Amagi was to revolutionize broadcasting and TV advertising. While other media like print, radio, digital and outdoor had Geo-specific advertising, TV was national. On the one hand, TV is the most effective medium for mass communication. It is also extremely expensive. You could either advertise nationally, or you couldn’t advertise at all,” said co-founder Srinivasan.

Technology behind the scenes:

Amagi buys ad airtime from broadcasters to facilitate Geo-targeted advertising and cloud-based content delivery. Or in simple words, Amagi’s technology makes it possible to broadcast ads for local business for targeted regions instead of showing it globally, resulting in reduction of advertisement cost.

On the technology front, Amagi uses cloud-based technologies to create a reliable, scalable, and cost-effective alternative to traditional satellite TV broadcast infrastructure. Using its patented content watermarking technology, company overlays a signature/watermark on the video (TV commercial which needs to be replaced), then detected at the satellite receivers at MSOs (multiple system operators) and replaced with the regional ads. 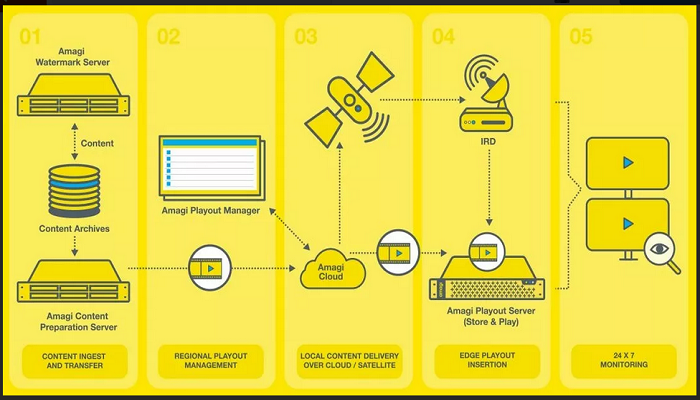 According to Baskar Subramaniam, co-founder of Amagi, the company already has at least 2,500 brands on board, including the big shots like P&G, HUL, ITC, Dabur and GSK. Present in over 15 countries, Amagi overseas is providing its technology to TV networks to enable them to deliver targeted ads or content.

Recently, Mayfield (their second round) and PremjiInvest (the family office of Wipro Chairman Azim Premji) has invested more than $15 million in Amagi. Also in the past the company had raised Rs 68 crore from Mayfield and Nadathur Holdings, the family office of Infosys co-founder N S Raghavan.

“Over the last few years, we have served over a total of 30 million ad seconds. Today, we handle close to a million ad seconds a month. We expect to see a multi-fold growth in the next couple of years,” Subramaniam tells in an article to business standard. Targeted at a huge market of Rs 6,500 crore, Amagi has grown 300% in its revenues in comparison to the previous year.

Amagi reaching for the sky!

Amagi is competing up against two major players, namely Rediff’s Vubites and Star India’s Adsharp.
According to the expert Harish Bijoor,” we are a very clonal audience. An audience that is spread out thinnest in commonality and deepest in diversity. Such an audience reach platform is a crying need. Amagi does it right here.”