One progressive tech savvy farmer from Karnal managed to save his wheat crop from untimely rains, strong winds and hailstorm weather, as he had sown his crop using the “Happy Seeder” machine unlike the broadcasting method used by most farmers. 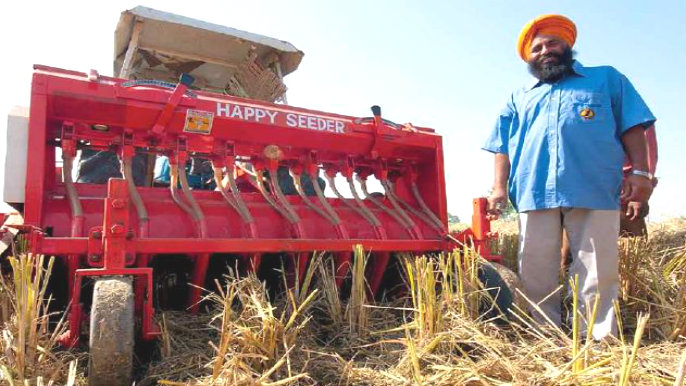 Using machines which sow rice directly, devices to inform when to irrigate and phone messages warning of infestations, thousands of farmers are learning to adapt to climate change, boost soil fertility and reduce their carbon emissions.

“At first, many farmers were unsure. It’s a big risk to change the way you have farmed for decades and try new things. Agriculture in these parts is not just a livelihood, it’s a way of life,” said Harpreet Singh, a tech savvy farmer.

“But over the last four years, through these technologies, we have learnt to save water and fertilizers, cut our costs for hired labour, improved the resilience of our crops and also reduced pollution by not burning crop residues.”

Singh is from one of 12,000 farming households across 27 villages in Haryana’s Karnal district working with scientists from the Consultative Group on International Agricultural Research (CGIAR) to pilot climate smart techniques aimed at sustaining one of the country’s most fertile belts.

Since India’s so-called “Green Revolution” – a massive government programme rolled out in the 1960s and 1970s which increased the use of fertilisers and irrigation to boost farm output – Haryana’s rice production has soared to almost 4 million tonnes in 2013/14 compared to 334,000 tonnes in 1966/67.

But while the Green Revolution may be credited with ending famine across the country, it has come at a cost and, coupled with more unpredictable weather attributed to global warming, India’s food security is once again at risk.

Almost half a century on, farmers face environmental problems such as depleted groundwater because of intensive pumping for irrigation, soil degradation and soil salinity.

Farmers are being introduced to “Happy Seeders” which can be attached to the back of tractors. These remove crop residues, blending them into the soil, preventing the practice of burning crop residues that has led to increased emissions and depleted soil fertility. It costs around Rs 1.15 lakh.

“We didn’t know anything about these advanced technology machines before,” said Manoj Kumar Munjal, 40, who farms a 20-acre plot of land in Taorori village.

“We have learnt about these machines and set up a cooperative where we all put in the money together and bought machines and share them. Now everyone is using it.”

Singh said over the last four years, his income has increased by 15 percent due to savings made on electricity for irrigation, diesel for residue burning, labour and fertilisers. But it is the saving on water which satisfies him the most.

“Day by day, the ground water levels are going down and down. If we continue like this, its only a matter of time before we don’t have water to drink, let alone to farm,” he said.