Jan Koum, the co-founder of social messaging app Whatsapp announced that he was leaving Facebook, which acquired the messaging service in 2014 for $19 billion.

Koum announced his decision to leave the ranks of Facebook to the public on his Facebook page, citing that he will now focus on his passions off work such as collecting air-cooled Porsches, working on cars and playing ultimate Frisbee.

According to several US media outlets, the departure is mostly due to disagreements with Whatsapp’s parent company, Facebook, over the use of users’ information on the messaging service app. Indeed, reports suggest that Facebook is looking for ways to use private user information to raise income from its daughter company in ad-targeting strategies similar to those employed on Facebook and Instagram. A decision that went against the principles of Jan Koum and therefore encouraged the latter to resign from his high-ranking executive position and leave the board of the online social network.

“It’s been almost a decade since Brian (Acton) and I started WhatsApp, and it’s been an amazing journey with some of the best people. But it is time for me to move on,” read the Facebook post from Whatsapp’s co-founder. 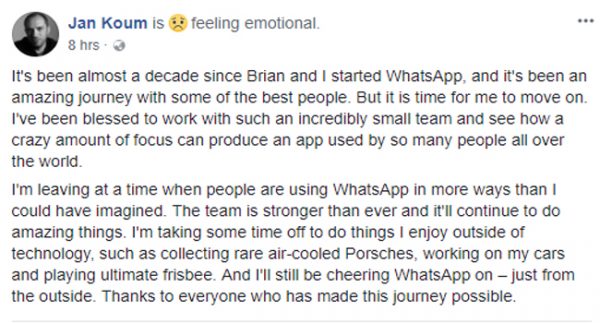 The other co-founder of Whatsapp, Brian Acton, also took the decision to leave the company’s board and position last year to focus on non-profit organizations. However, after the recent Facebook-Cambridge Analytica scandal suggested that Facebook failed in safeguarding the private information of around 87 million users, Brian Acton was quick to react on the social micro-blogging platform Twitter by encouraging Facebook users to delete their accounts in a campaign led under the hashtag #DeleteFacebook.

Commenting on Koum’s post, Facebook founder and CEO, Mark Zuckerberg said that he would miss working alongside the Whatsapp co-founder.

“I’m grateful for everything you’ve done to help connect the world, and for everything you’ve taught me, including about encryption and its ability to take power from centralized systems and put it back in people’s hands. Those values will always be at the heart of WhatsApp,” read Zuckerberg’s comment on Koum’s post.