WhatsApp is one of the most successful messaging platforms today that has a whopping 1.5 billion monthly users base of active users in the world. While the instant messaging service is often riddled with scams, a new forwarded message is doing the rounds of WhatsApp which claims to hang the app for some time.

The latest spam message starts from “black dot” and ends at “don’t touch here.” The message reads, “If you touch the black point then your WhatsApp will hang.” The black dot within the message seems to be the culprit which will freeze your phone or either make the app unresponsive once you touch it. This is not a hoax as many WhatsApp users, particularly on Android, have reported of the app crashing after they tap on the black dot.

Black Dot-Is it the Real Culprit?

While the Black dot is being considered the felon here, it is not the real culprit. The app is freezing because of the black space placed between the text and the black dot. The message when converted to HTML reveals the presence of RLM (right-to-left mark). RLM is an invisible formatting character used to differentiate between left-to-right text and right-to-left text. 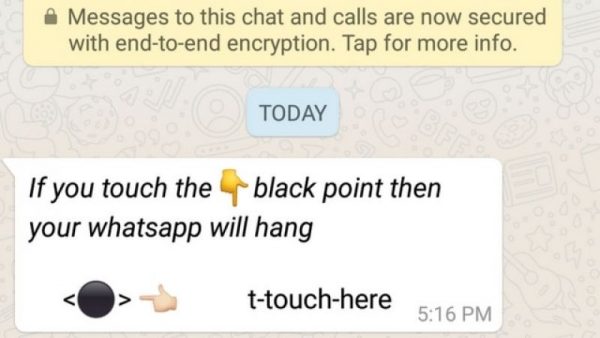 It is the use of wrong directional formatting that is causing the messaging app to change direction from left-to-right to right-to-left, which ultimately leads the app to crash.

The bug has reportedly led to crashing on Android devices hence iOS users need not worry. While there is nothing malicious behind this bug but has seemingly been created to plague users. Additionally, this is not the first time when a bug has caught hold of an online smartphone app, a few months back there was a news regarding a Telugu text bomb crashing the iMessage app on iPhones.

Recently, company’s annual developers’ conference F8 had announced that the mega messaging app will come with a dose of new features like stickers and group video calling to enhance user experience. WhatsApp director, Mubarik Imam had also said that the app might get some new features on its business based version too.