Android and iPhone debate has always been the hot topic, but this time it has taken a giant leap when an image of Bugdroid (the mascot of Android) urinating on the Apple logo was found in Google Maps.
However the image has already been removed by Google, which is the most visited site. Google has also apologized for the same.

According to the Verge, Google said in a statement that it was sorry for the “inappropriate user-created content” and that they were working to remove it as soon as possible. Google spokesperson Mara Harris said that they are improving on how to “detect, prevent and handle bad edits”.

The company also said that “we also learn from these issues, and we’re constantly improving how we detect, prevent and handle bad listings”.

A user from a location near Rawalpindi, Pakistan found the image going through the coordinates. Soon after that, the image went viral on the internet, with many netizens posting about it on Twitter and Facebook. 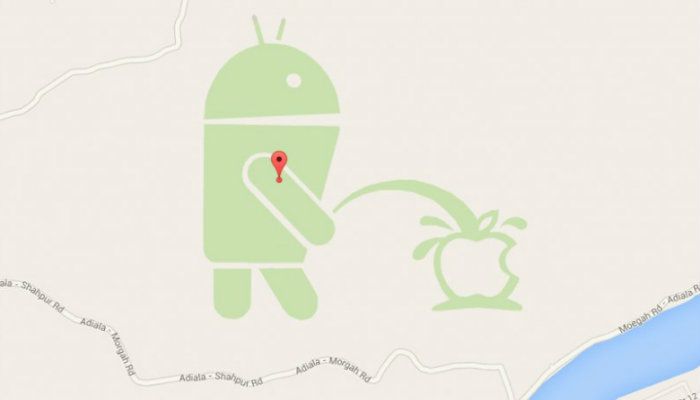 Whoever did this is surely an Android fanboy!

The culprit is still unknown, but can easily be guessed as a huge fan of Android, who inserted the image in Google Maps via Map Maker tool.
There has been news recently about the stabbing incident between two roommates over a heated debate regarding Android and Apple, but this time the rivalry has been on a different path.
Two other interesting things were also seen earlier, when an image of Skype was seen over other co-ordinates. 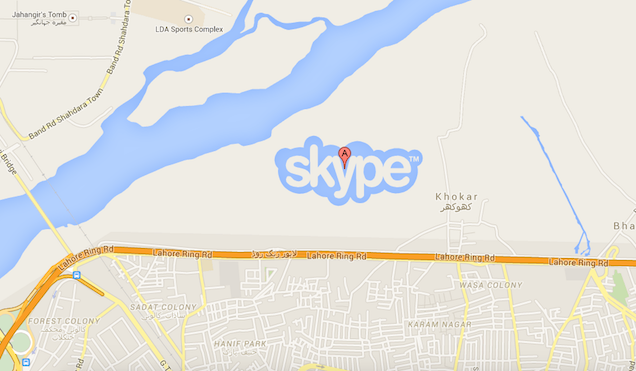 Skype too was on Google Map

Another was an image saying “Google review policy is crap“

Without a doubt, Google Maps is an amazing tool, and while abuse like this is amusing, Google needs to get a handle on it. Stay tuned for more updates on this!
Next article
Previous article