Therefore, the cab aggregator Uber launched the second phase of ‘Movement’, a free tool destined to collect data from millions of trips and eventually assist urban planners in achieving sustainable development in road infrastructure and implement policies that would substantially improve commuting facilities in metro cities.

Uber is taking a formal stand against traffic congestion with this initiative and shows its commitment in finding innovative ways to tackle urban problems such as traffic congestion, pollution, encouraging carpooling and the use of public transport. 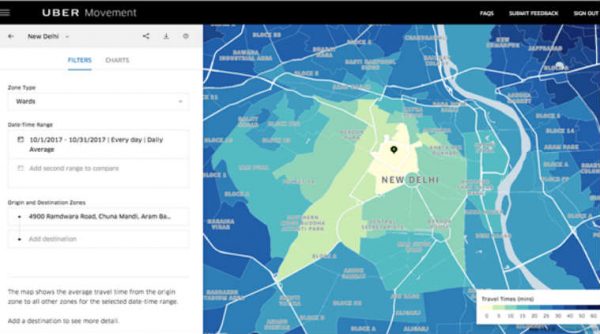 The first phase of ‘Movement’ was a beta version introduced in 10 cities around the world last year. Dara Khosrowshahi, CEO of Uber formally launched the second phase of the project on Thursday and brought this new tool to India as well, launching the tool in Delhi, Mumbai, Bengaluru and Hyderabad. This move also signals Uber’s strong intention to remain in India after leaving several markets in recent months, especially SouthEast Asia. Additionally, it shows the company’s commitment in not only making business in India but also in improving the overall quality of development occurring in the country.

‘Movement’ is a public tool which will focus in providing insights as well as solutions that individuals can get access to at any time and is therefore a great asset for India to develop data sharing exercise of traffic patterns.

Additionally to the 4 Indian cities in which ‘Movement’ will be launched, the tool will also be implemented in 8 other cities namely Amsterdam, Brisbane, Cairo, Melbourne, Nairobi, Perth, Pittsburgh and Toronto, therefore making the second phase of the project distributed across five continents and seven countries.

“We are delighted to bring Uber ‘Movement’ to India, an exciting new tool that has open data architecture and collaborative spirit at its heart. This will encourage data-driven policy-making to solve for some of the biggest challenges faced by our cities. We are confident that by collaboratively leveraging the power of open data, governments, industry, and academia can together create a real alternative to a world that moves like a jam and looks like a parking lot and help redefine the future of urban mobility,” said Prabhjeet Singh, regional general manager, Uber India and South Asia.

Uber’s ‘Movement’ will be a useful tool to assist the developers of road infrastructure they will have data to measure the impact of road maintenance, major event and transit lines. The data collected can also outline recurring commuting patterns that would help in making smart and therefore economical investments in upcoming traffic projects.

Commuters will also benefit from this tool as it will allow them to see the recurring time major congestion, the alternative routes, and road closures occurring in the city, therefore enabling them to manage their travel time properly.

By giving free access of the data to everybody, including local governments, transportation researchers, urban infrastructure think tanks, etc… Uber is certainly hoping that its investment in data-driven technology will lead to reduced traffic congestion and efficient revision or implementation of transport policy and smart urban infra investments.