Taranjeet Singh, the man behind the growth of the business of Twitter in India has stepped down from his position as Country Director. This announcement was tweeted by him on the microblogging website on Tuesday.

Following the stepping down of Taranjeet Singh, the company’s Twitter’s global head of revenue strategy and operations Balaji Krish will take over the position of the latter. He is coming from the US to be interim country lead from the next month.

Hello everyone, after 4 amazing years, I have decided to move on from @TwitterIndia – from being one of the first @Twitter employees in #India, to building up the sales team from the ground up, to leading our expansion and investments as the India Country Director #AmazingRide pic.twitter.com/qMG4QDvL4a

Singh started his journey with Twitter in 2015 by joining the social media platform’s India office as Business Head and led the charge for sales and marketing support for Twitter’s advertisers in India.

Soon in 2017, he was promoted to the role of Country Director for Twitter India. During is work period at the company, he helped double the user base in India for Twitter to nearly 30 million users.

A Twitter spokesperson said, “We thank Taran for nearly four years of contributions and leadership to Twitter India. He built up our India sales team across the country and, most recently as our India country director, he led our cross-functional effort that has made India both one of our largest and fastest growing markets today. Under his leadership, we have seen strong business performance, a diversified client base, and many innovations for Twitter across India.”

Prior to joining Twitter, Singh spend close to a decade with BBC as head of advertising and Sales Director of South Asia. Here we have some other tweets from Taranjeet Singh. 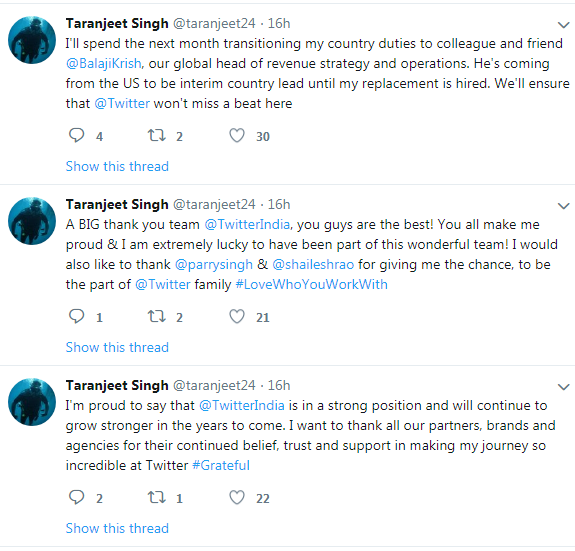 As compared to Facebook and Whatsapp who have been involved in many controversies regarding spread of misinformation on its platform, Twitter India has always had a good image. Singh stated that Twitter India is in a strong position and will continue to grow stronger in the years to come.