Nine months after being ousted from one of the world’s most successful startups, Uber founder Travis Kalanick is back in business with a brand new project. Kalanick is now launching a 10100 fund from his personal fortune to invest in startups, “for-profit and not-for-profit work.”

Kalanick has already started working on investing in startups by making several investments over the past few months and working with various company boards and engaging with entrepreneurs and non-profits. He made angel investments in startups such as software firm Pantheon, social media platform Blippy, online artwork community Deviant Art and medical startup Kareo.

However, the interesting part is that Travis Kalanick is going to focus a large sum of his investments fund, named 10100 (pronounced ten-one-hundred), in India and China. He aims to tackle large-scale job creation while focusing his investments in real estate.

“The over-arching theme will be about large-scale job creation, with investments in real estate, e-commerce, and emerging innovation in China and India. Our non-profit efforts will initially focus on education and the future of cities,” tweeted Kalanick on twitter. 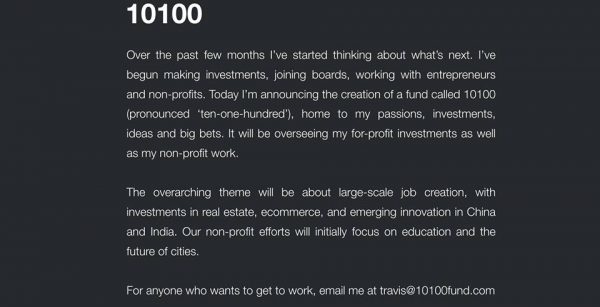 Kalanick’s aspirations as an investor come after reports suggesting he sold 29% of his stakes in Uber for $1.4 billion to Japanese internet giant SoftBank and several other investors, who reportedly agreed to buy his shares of the ride-sharing giant company valued at $48 billion. Despite leaving Uber back in June, Kalanick still remains on the company’s board of directions.

Investors, however, are more inclined to believe that Kalanick’s investments in Asia will be more focused on India rather than China due to the experiences he had in both countries.

“Travis Kalanick has visited India more often and has engaged with Indian startups rather well. He is likely to be in the process of scouting for a local team to identify opportunities in emerging technology such as artificial intelligence, internet of things, robotics across sectors that may be more relevant in India such as healthcare and fintech, beyond cab hailing alone,” said managing partner, Vikram Gupta at IvyCap Ventures.

Kalanick will only open his funds to startups with innovative business models, which will be in line with his belief that San Francisco, Beijing and Bengaluru remain the major innovation hubs in the world and the only places he will be inclined to make his bets on.

Kalanick is following a growing number of global technology founders who are currently investing massive sums of money in Indian startups. Facebook founder, Mark Zuckerberg through the Chan Zuckerberg foundation holds a stake in edutech firm Byju’s while Eduardo Saverin, co-founder of Facebook, has made a personal investment in Hopscotch, a baby care firm. Saverin also invested in fintech startup Mswipe through his fund B Capital.