Elon Musk committed a blunder on December 19 by accidentally revealing his cell phone number on Twitter. He was quick in realizing his mistake but for person who has more than 16 million followers, he was not fast enough.

Musk in an attempt to contact John Carmack, the CTO of Facebook-owned Oculus, instead of sending him a private text message, posted a tweet, tagging him. This is what he tweeted: 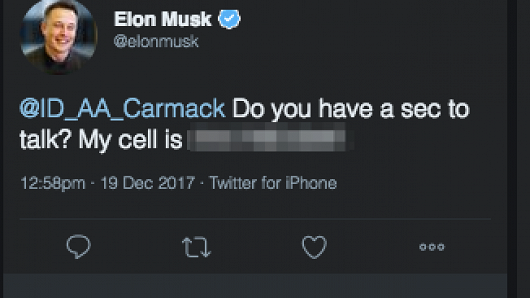 As soon as he tweeted, it went viral on twitter and some of his fans quickly took a snap of it. To the surprise, CNBC even called on that number. Although nobody picked up and the call went to voicemail, but they did hear Musk’s voicemail greeting.Check it out for yourself what does it say:

“By the Gods you’ve done it,” the message starts. “Somehow you’ve found your way here to me. I offer you my congratulations and my respect.”a recorded message from the video game- God of war, recorded by game creator David Jaffe, is one of two secret codes hidden in the game.

It is no surprise that Musk never fails to surprise everybody. The message clearly suits his style.