Talks for the proposed acquisition of the beleaguered Snapdeal by larger rival Flipkart seem to have broken down after almost six months of negotiations, with the fate of the deal likely to be decided by the end of the day, according to company sources.

The founders (Kunal Bahl and Rohit Bansal) and shareholders have not yet agreed on the terms of the deal as the former are pushing aggressively for continuing operations as an independent entity, one of the sources said.

They did not want to be named as they are not authorized to speak on the matter and the discussions are still under way.

When contacted, Snapdeal did not comment. A SoftBank spokesperson said “a board resolution is expected by the end of the day“.

Snapdeals largest investor, SoftBank, has been proactively mediating in the talks for sale for the past few months. The deal with Flipkart for USD 900-950 million, if it goes through, would mark the largest acquisition in the Indian e-commerce landscape.

The latest developments come within days of Snapdeal agreeing to sell its digital payment platform, FreeCharge, to Axis Bank for Rs 385 crore.

One of the sources said if the decision to continue as an independent entity is accepted, it could see Snapdeal reducing its workforce significantly and scaling down operations. 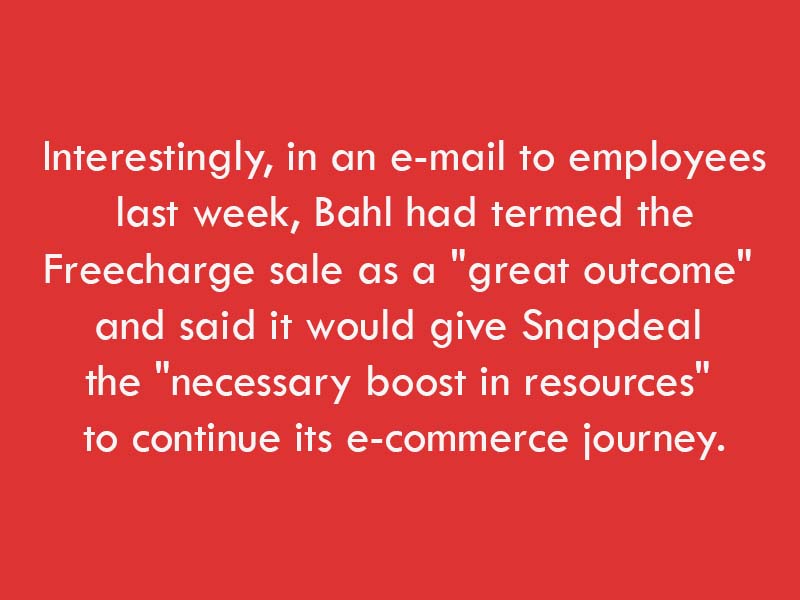 The company is also holding discussions with potential buyers for its logistics arm, Vulcan Express.

The proceeds from Freecharge sale and Vulcan, when it comes in, could buy Snapdeal some months to continue independently, the source added.

One of the leading contenders in the Indian e-commerce space, Snapdeal has seen its fortunes falling amid strong competition from Amazon and Flipkart.

Compared to a valuation of about USD 6.5 billion in February 2016, the sale to Flipkart could see Snapdeal being valued at about USD 1 billion.