Swiggy, a pan-India food delivery app, whose claim to fame was by creating opportunities for local restaurants and the underprivileged, have recently come under the spotlight for allegations of fraud and trickery. In an anonymous post, on Tumblr, current and former employees exposed the company’s skeletons, leaving people feeling furious and cheated. The criticism itself was contemptuous and clearly displayed the abhorrence of the writers. The post contained proof in the form of photographs that revealed the contrast between company-held figures and the presentations sent to investors. Such corruption could be expected from a big multinational company but not from an innocent, idealistic startup. Here are the crimes, Swiggy was accused for committing in the Tumblr post, “Swiggy, a House of Cards” by Swiggy Sales :- 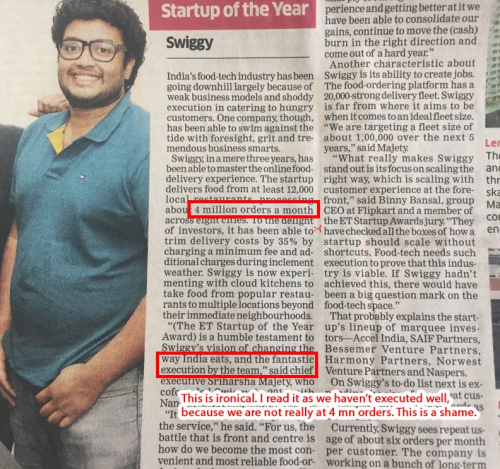 Looting Their So-Called ‘Allies’ In The Present 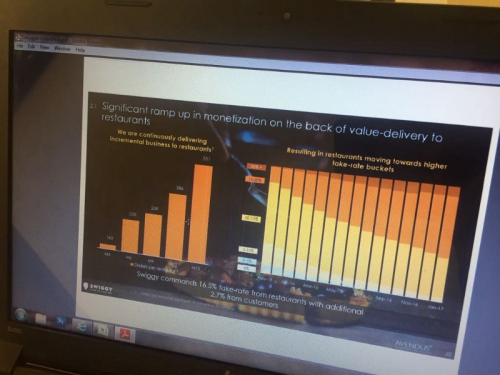 Swiggy’s sales team, prior to even approaching restaurant owners for the first time, know that the contract they sign, will be renegotiated repeatedly over the next few months. They are ordered to lie about the company’s order volumes and market share when pitching to their potential customers. Swiggy promises to help smaller restaurants but takes away their net profits by increasing commission every few months. Since these smaller restaurants are less likely to question, Swiggy pulls the wool over their eyes. In some areas of Bangalore and Hyderabad, it has complete dominance over the market. This results in some businesses paying Swiggy more money than their actual earnings. Owners of bigger restaurants have informed, that since their turnover rate is good, Swiggy hasn’t posed any threats to them. According to the post, many employees feel guilty but fear of losing their jobs keeps them mum on the subject.

Looting Their So-Called ‘Allies’ Even More In The Future 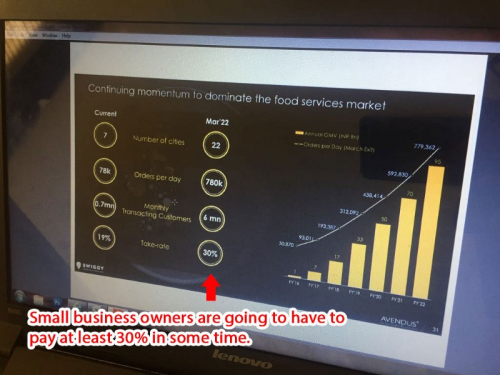 The company has been forcing its employees to push the average to 30 percent. Swiggy started in 2014, with an average of 5 %, but soon it changed to 10%, then to 25% and now the management of the startup want the average commission rate to be 30% by 2022.

30% average implies some of the restaurants will be paying 40% and most of the burden will drop down on the small eateries. 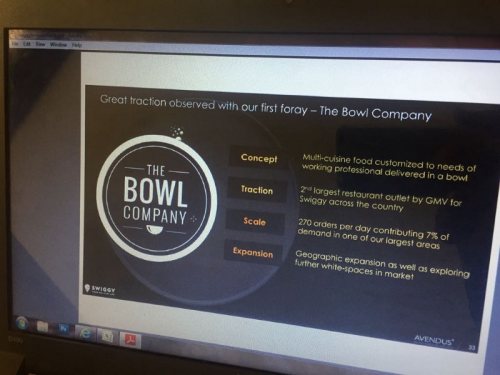 The Bowl Company is Swiggy’s own private kitchen, Swiggy promotes through unacceptable ways. It chose the best business area in Bangalore and directed all users towards The Bowl Company. It unfairly pits its own business against their “partners”, and makes it win while telling rest it exploits the very people, it is supposed to be aiding.

Cheating on Consumers Who Use the App

According to the post, most of the raving reviews you see online are paid for and most negative comments are removed immediately. At Swiggy, they don’t work on improving but defend by giving excuses through company policies and orders.

The management of Swiggy lie to their investors to show a uniform growth curve across the different months. It’s January 2017 orders were lesser than December 2016, but to hide the inconsistency, the Swiggy team changed the statistics accordingly.

According to the Tumblr post, many employees are promised bonuses and advances that they never end up receiving. Apparently, around 10-15% are always on PIP and treated like robots that are easily replaceable. The post further conveys, that so many workers are fired, that Swiggy hires new employees, just to protect the company from the press.

Telling Lies to the Media

Even the media is not spared. All those articles claiming to know how many people order what, are not back by reports or study. Pictures prove that orders were 3 million one month and they went to 4 million in a few days. The workers had access to the numbers a few days before it broadcasted incorrectly in public spaces. And to think, the reason behind its win for the Startup of the Year Award is cheating and lying to the core, leaves me in a heated frenzy!

Lastly, from everything that was listed in the post; I can infer that it is not a very positive workplace where the senior management staff completely rides on immoral decisions, power and lives of poor men and women. Even, the post states that healthy feedback is unwanted and office politics is the only way to here. Also, the company doesn’t take responsibility for the delivery men it hires; simply, because their contracts term them as freelancers. This conveys that these hard working men from small towns are refused their basic right to safety and security while working for Swiggy.

Swiggy’s CEO has denied all these allegations in his post “Swiggy Response: A note from the CEO” on Swiggy’s personal blog. He fired back, saying, that none of the numbers were tampered with, and it can be proven by credible, external sources.

What are your thoughts on the topic? What do you think? Is Swiggy guilty or not? We would be pleased to know your view on this. Also, if you are a restaurateur, big or small and would like to contribute to the community, it will be our pleasure to give you a platform to do so. Thank you.