Despite February being the shortest of the month, UPI (Unified Payments Interface) has seen a massive rise in the use of service. Indeed, in India alone, 170 million transactions has been made across the multiple mobile payment platforms available. UPI allows individuals to perform instant money transfer across different banks through their mobile phones.

Paytm claims to be the highest contributor to the rising amount of UPI transaction in the country with over 6.8 Cr transactions in the month of February alone, the company announced in a note. As such, the Indian mobile wallet application claims the most shares of this new market with over 40% users utilizing this interface. “We have the largest share of UPI transactions within three months of launch,” said Deepak Abbot, senior vice-president at Paytm.

He also added, “Paytm UPI is a part of our efforts to make money transfers simpler, and bring convenient mobile payments to new and existing consumers across India.” 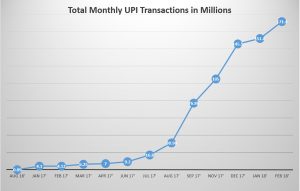 The amount of UPI transactions carried out through the Paytm app is on a constant rise ever since its inception in August. Indeed, the service provider logged 37 million transactions in the last month of 2017, followed by 51.2 million in January. Although Google did not share any precise transaction numbers from its payment app Google Tez, the company did announce to have crossed the 250 million transactions since its launch back in September of last year.

The Indian company, based in Noida and founded in 2010 has constantly delivered huge amounts of UPI transactions over the last few months.  For example, in December 2017, Paytm contributed 33 Mn to the overall UPI-based transaction volume, amount that increased to 51 Mn in January 2018 and 68 Mn in February 2018.

“We are happy to contribute the largest share of UPI transactions within three months of launch. Paytm is the largest mobile payments ecosystem in the country, and we are seeing exponential growth. Paytm UPI is a part of our efforts to make money transfers simpler,” said Deepak Abbot, Sr Vice President of Paytm.

Contributing to the success of Paytm, more than 6Mn merchants are now using the mobile app to perform commercial transactions using UPI. Moreover, Paytm UPI ID’s are widely accepted in all banks and BHIM UPI apps, classifying the service as the most widespread payment methods in India. Consequently, the mobile banking service leads the money transfer volume in the country.

However, Paytm does not seem to settle down on their dominance in the market. In fact, they are now introducing new strategies to attract consumers such as establishing their own credit scoring product, Paytm Score which aims at consolidating Paytm’s lending vertical.

After acquiring online lending startup CreditMate back in November 2017, Paytm also ventured in the credit market. In partnership with ICICI Bank, they launched a short term, interest-free credit line, providing instant loans to their customers.

Paytm’s innovative marketing strategy cemented its place quickly in the modern digitalizing India. It is widely spread mobile banking system accepted in over 6Mn small stores and large retail chains nationally. Additionally, they are dedicated in proving the best and most secure payment structure for both customers and merchant partners.

Finally, the sudden rise of mobile payments is certainly going to thrill Prime Minister Narendra Modi as his ‘Digital India’ campaign seems to be relayed by both businesses and the masses.