Taxi hailing app Ola said its wallet, which was earlier only used for paying for taxi rides can now be used on other platforms including budget hotel rooms aggregator Oyo Rooms, online spectacle retailer Lenskart, and music streaming service Saavan. The company expects to add more players from other retail categories.

“We will be leveraging our customer base and provide (ola money) payments solutions for all categories including travel, on demand food and groceries,” Rushil Goel, Head, Ola Money, told ET. “Soon we will also be launching offline in store partnerships with brands,” he added without specifying the timeline. More than 50% of transactions on Ola are from its wallet. 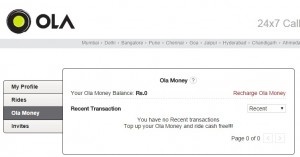 Ola does not hold a licence for a semi closed wallet and has tied up with mobile wallet Zip-Cash to facilitate third party transactions. ZipCash has a licence from the Reserve Bank of India to set up a Payment System and issue under the payments and settlement Act, 2007, according to its website.

Ola is expected to cross annual gross revenue run rate of $1 billion by next quarter and has been expanding into other areas like food and grocery delivery.