Mukesh Ambani, the chairman of Reliance Industries has achieved the position of Asia’s richest man, bringing down Alibaba’s Jack Ma to the second position.

According to the reports, Ambani’s estimated total wealth amounted to around $44.3 billion after Reliance shares rose 1.6%. The business tycoon added $4 billion to his wealth in 2018. On the other hand, Jack Ma lost $1.4 billion in the same year.

The market valuation of the company raised powerfully over Rs 7 lakh crore mark during the morning trade on Friday. Reliance Industries crossed the $100 billion market capitalization mark, and this was its debut in the last 10 years.

“We need to broaden our horizon of expectation with Reliance,” said Nitin Tiwari, a Mumbai-based analyst at Antique Stock Broking. “They are in for something really transformational,” he added. 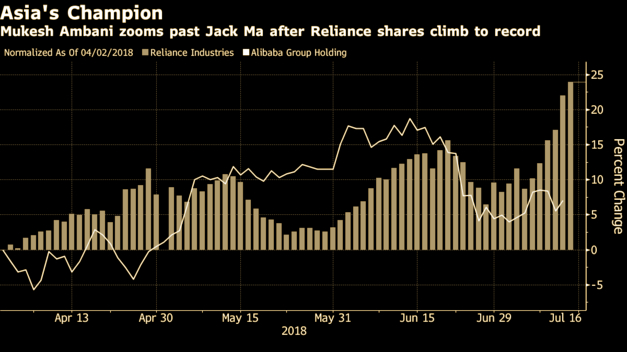 Apart from this, Jio will bring in a fiber-based broadband service across 1,100 Indian cities in August. And, Ambani claimed that this would be the largest greenfield fixed-line rollout anywhere in the world.

“Jio is the driver behind the surge in Reliance,” said Deven Choksey, managing director at Mumbai-based KR Choksey Shares and Securities Pvt. “If the company is going to double profit a few years down the line, the stock price will also double, if not more.”

Reliance Industries has been witnessing a huge level of success for a long time and to achieve such a spot, is an achievement for the country as well. The country now expects to grow more and more. Reliance re-entered the $100 billion club after more than a decade, and this has proven to be a great news for the business magnate as well as for the nation.