Tow days before when OLA was trending, I thought it might be a marketing gimmick …. Indeed it was!!

Great job done by the Marketing team at OLA to seize this opportunity to showcase OlaBoat service as a “Goodwill” gesture and capture top of mind recall within their Customer Base.

That’s what I would call a Masters stroke by a relatively new player in the Market flooded with many big brothers (MNC’s) who are often advised by bigger advertising Gurus.

I remember the day last year almost same time when Ola’s biggest rival “UBER” was much criticized for employing “surge pricing” during the hostage crisis in Sydney last year. It was an unfortunate event which “UBER” tried to monetize unlike “OLA” who capitalized the opportunity for “Brand Building”. 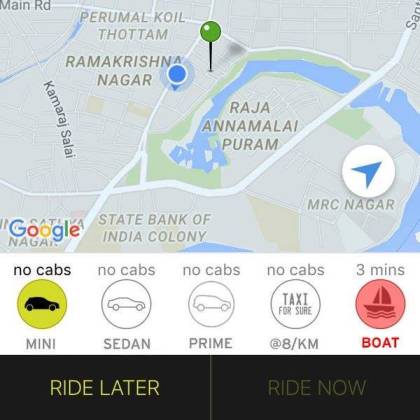 Continuous rain for last ten days in one of the biggest cities in the world made life difficult for the commoners. Many were stranded. Still many without basic supplies. When Army and other forces were deployed; OLA’s marketing team devised one of their best campaigns by roping in few rowers and creating what

they call as “Rescue Ola Boats”. The boats not only helped the stranded people but transported basic supplies as well.

These would not only give them the best coverage in almost all the News Papers but at no cost. Also the customers brand recall would be the best.