Two SEC filings posted by Khosla Ventures indicates that the company will raise an additional $1.4 billion across two new venture capital investment funds. This will bring the amount of publicly known capital under management to $5.8 billion across its main venture and seeds funds. The 5.8 billion does not comprise of assets from the first two venture funds or any sidecar funds for which public filings are not available. 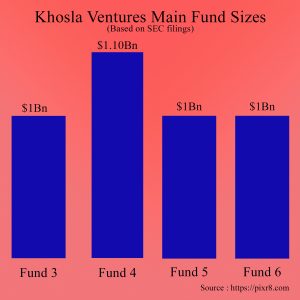 The $1 billion sixth fund revealed today, again, is right in line with past averages. With an additional $100 million, the fourth fund is the greatest here.

The seed funds however is more variable as the next chart shows. 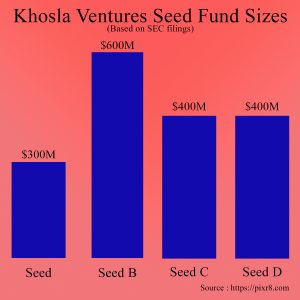 Lately, venture capital firms have attracted a lot of attention for raising larger funds week in, week out. Sequoia Capital, for example, will raise a fresh $12 billion growth-stage venture fund to compete with the likes of SoftBank. The Japanese giant however plays in a league of their own boasting $100 billion with their venture company Vision Fund.

While for the common man, Khosla’s $1 billion for a new venture fund and $400 million for a new seed fund might sound like all the money in the world, it is just a small drop in the ocean after what the same firm has raised previously.

The current listed fund in the regulatory filings is the exact amount as Khosla’s previous seed-focused fund, which was announced back in 2014. And as the $400 million is situated between the AUM figures of Khosla’s first two seed funds, the fund leads us to believe that its size is meant to fit the company’s investing strategy.