As per the TOI report Indian startups are among the top 11 Asian ventures that went from seed funding to series A funding the fastest in recent times.

CB Insights also looked at the startups that went from series A to B the fastest. Here, three Indian startups — Culture Machine Media, Locon Solutions and TinyOwl — were among the top 10 Asian ones. 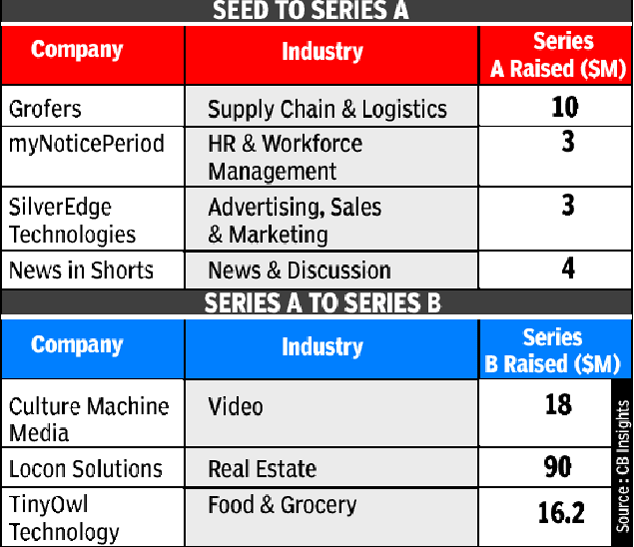 Ravi Gururaj, chairman of the Nasscom Product Council, says Indian startups are demonstrating traction early on for investors to engage with these companies. And that, he says, is happening because the Indian market has hit a critical mass of online users, because of the massive increase in mobile usage, and because of a huge mindset shift among consumers, who are now more willing to experiment with new services from startups. “Investors are also more willing to pull the trigger earlier on account of competitive pressures,” he says.

Sharad Sharma, angel investor and co-founder of software products think-tank iSpirt, notes that the “god” in the VC model of entrepreneurship is velocity. “So you either succeed fast or fail fast,” he says.

Recruitment startup myNoticePeriod raised Rs 18 crore from IDG Ventures India in February, less than six months after the Bengaluru-based startup received Rs 2 crore in a seed round in September last year. Hyper-local delivery startup Grofers raised $10 million in a round led by Tiger Global Management and Sequoia Capital less than four months after raising $500,000 in a seed round.

“Indian startups have grown and we are competing with Israel and Europe for VC funds,” says Sharma.

Venkatesh Peddi, executive director in IDG Ventures India Advisors, says large enterprise customers are embracing startups much faster compared to what they did previously and that has helped the startups to scale faster. “Entrepreneurs have become sophisticated, thanks to the positive momentum in the startup ecosystem, and that has accelerated the propensity to engage with future investors early on in their entrepreneurial journey,” he says.