Since 2009, Forbes India has been compiling and publishing a data set on the 100 richest Indians. It is one of the most comprehensive data that you will find on India’s wealthiest people. We have been crunching the figures every year to find interesting nuances and changes in the composition and distribution of wealth among the top 100. Over the last seven Forbes India rich lists, the data set has increased to 700 records and we decided to do something interesting with it.

We came across Tableau, a data visualisation company, which has the ability to convert any data into a picture. Their job is to “make data and spreadsheets understandable to ordinary people”.  One of the minds behind Tableau is Professor Pat Hanrahan, a founding member of the animation film company Pixar, who believed that a Pixar kind of technology can be used in data visualisation. 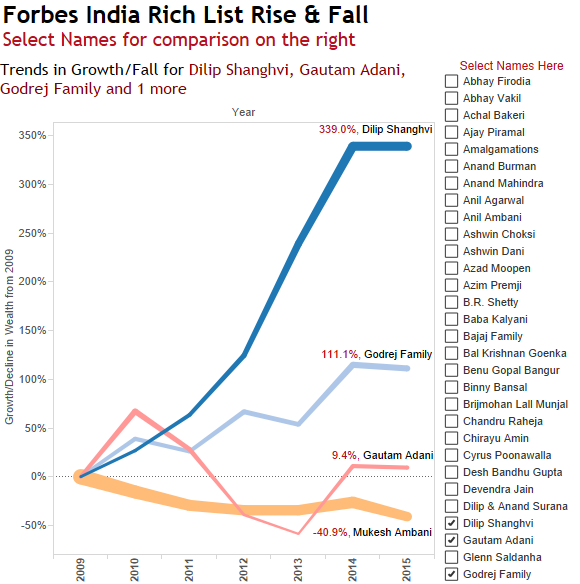 2. Distribution of wealth: Here we have represented the wealth of each rich list ranker as a share of the total wealth of the richest 100 Indians. The individual’s share of wealth is represented as a bubble which can be compared over 2009 and 2015. This panel is not interactive.