Every year brings a new exercise fad, but a new technological trend appears to be changing the very way people are approaching fitness. Smartphone apps and the smart wear that goes with them allow users to monitor their every action and share them online. 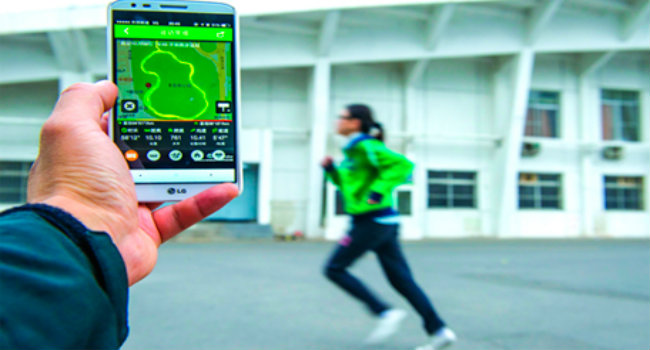 Lacing up and hitting the track is a time-tested way to keep fit. But now, there’s something new, with smartphone apps promising to change exercise forever. Feifei here has always been into fitness, but the new wave of apps, she says, are taking things to a new level.

“For me, apps make things a lot easier. I can calculate my distance, calories, and how much I work out. It also gives me something to post on social media,” said Yan Feifei, a running enthusiast.

Sharing results online is a key part of the new app movement. Some do it for competition or to show off, but for Feifei, it’s about proving she’s for real.

“Before, I used to be a fitness instructor. I still want to be a role model to my friends online so I like to post things to show I’m still involved and I’m not fake.”

I’ve just jogged for a short while, and this app has tracked everything… from my time, my blood pressure, even my number of steps. Given enough time and enough data, it would even be able to give me health and fitness suggestions. It’s all part of a growing trend of exercise going digital.

One company that’s getting in on the action is Chinese smartphone giant Xiaomi. Working with partner company Huami, they’ve integrated their own fitness app mifit with a smart band to track the wearer’s every exertion. They feel there was a real gap in the Chinese market.

“We’ve been looking into the wearable market for a long time. We think the market is not well developed in China and there’s a real opportunity to come up with better products. We specifically launched the app and bracelet so they would work together,” said Xia Yongfeng, Mi Ecosystem, director of Product Development of Xiaomi.

In their view, it even goes beyond exercise. People want to monitor everything they do in order to live a healthier life.

“Of course people who work out use it, but it’s also for people who want to know about their quality of sleep at night. A smart algorithm can wake you up at the perfect time, and there’s a whole range of other functions,” Xia Yongfeng said.

And China is certainly in need of a fitness revolution. An official report from earlier this year revealed more than 30 percent of Chinese are overweight, and nearly 12 percent are obese.

But some are sceptical that this app revolution can solve everything. I caught up with Beijing fitness trainer Victor Rouse. He’s seen the growth of fitness apps, and while supportive, he still thinks they have their limits.

“Well, it’s great so many of these are being downloaded. but whether they are actually getting more people into running I’m not so sure about. From what I can see it’s predominantly people who already have a running habit who are downloading these apps and sharing online. So whether it’s actually having any impact on China’s obesity problem I couldn’t be sure about,” said Victor Rowse of Prime Fitness.

Smart technology is changing fitness as we know it. But, while the apps might make things easier, they still won’t do the hardest part for you. And that’s getting off the coach and making a commitment to a healthier life.