Facebook’s Vice President of Public Policy for Asia-Pacific, Simon Milner had to appear before a Select Committee on Deliberate Online Falsehoods in Singapore where he was questioned by the Home Affairs and Law Minister K Shanmugam for almost three hours.

Mr. Milner had to give explanations to Mr. Shanmugam about the allegations that Cambridge Analytica unfairly used Facebook’s data and why Facebook users were not informed about the data breach earlier. He also had to answer questions about how Facebook will reposition itself after the recent controversy surrounding them since the events happened in 2016 during the US Presidential Elections.

The rest of the article is a script of the questioning between Mr. Shanmugam and Mr. Milner, which at times got rather heated up

Firstly, Mr. Shanmugam wanted to know if Mr. Milner agrees that Facebook describing the data breach of over 126 million people as a “drop in the vast Facebook ocean“ was dismissive. To which Mr. Milner replied, “We have not been dismissive.” 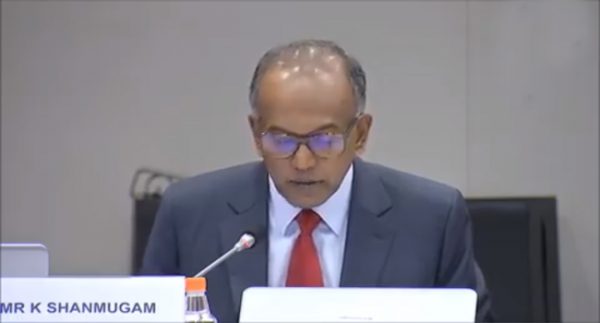 Mr K Shanmugan at the hearing

Mr. Milner: I do not. With respect, you have to look at the evidence as a whole; not to pick out a single a single phrase and suggest that it’s dismissive.

Mr. Shanmugam: The criticism that Bloomberg makes “for trying to make the volume of Russian propaganda look very small compared to the overall stream of Facebook content”. You reject that criticism as well?

Mr. Milner: I think anybody reading the whole of the evidence for them to conclude that Facebook is somehow belittling or dismissingly trying to suggest that it is not important. I don’t think any reasonable person could conclude that.

The Singaporean Minister then addressed the issue of Russian election meddling.

Mr. Shanmugam: Right. Let’s look at certainly a very reasonable person, Senator Mark Warner, 31st October 2017, “Senator Mark Warner isn’t sure that Facebook, Google, and Twitter have fully uncovered the scope of Russian election meddling.” He says that he is not sure that the tech industry wanted to follow accounting Russia’s disinformation efforts on their platforms. Has that been done now?

An issue that clearly created discomfort and the Home Affairs and Law Minister said, “That’s capable of a yes/no answer.”

Mr. Milner: We’ve made clear we are continuing investigation.

Changing the subject, Mr Shanmugam then enquired about an article written by news media ‘TechCrunch’

Mr. Shanmugam: Let’s explore that a little bit more; we’ll come back to that. Another article, October 31, TechCrunch, it says, “Stretch along with counsel from both Twitter and Google were criticized in some of their answers, including on the issue of banning foreign currency in political acts.” Would you accept that as an accurate categorization?

A short 15-minute break followed, upon his return, Mr. Milner expressed his reserves concerning the question. 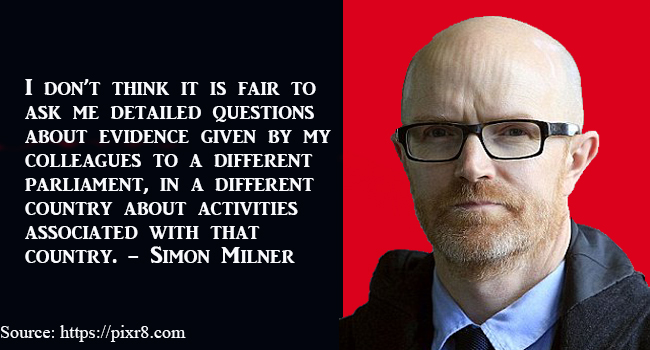 Mr. Milner: I would actually like to speak to the Chair at this point. I am not certain that this is a fair use of this committee’s time. This committee is looking into the deliberate online falsehoods here in Singapore. Myself, my colleagues and other people on this panel have come here prepared to answer questions on that and to help the committee understand it. I don’t think it is fair to ask me detailed questions about evidence given by my colleagues to a different parliament, in a different country about activities associated with that country. I would really like the Chairman (Mr. Charles Chong) to consider whether this line of questioning is appropriate.

After which Mr. Charles Chong asked Mr. Shanmugam, “Do you want to say something?”

Mr. Shanmugam: I will explain to you why. Obviously, the 15-minute break has allowed you to think whether or not you will answer the question and the reasons why…

At this point, Mr Milner interrupted the Home Affairs and Law Minister.

Mr. Milner: I’m really trying to understand why we are not talking about the issues about Singapore, about deliberate answer about the process here, about what our companies are doing about this. Instead, you wish to discuss evidence given by my colleague to three really long sessions in the US Congress, to ask me detailed questions about what exactly was said. I do not think that it is a really good use of our time. I respectfully – really respectfully suggest. And nobody said ‘I don’t want to answer your questions’. If you want to get to something, get to it.

The Chairman of the Committee then interfered saying, “Mr. Milner, I think you should leave it to us to decide what is relevant, what is not relevant. If you are unable to answer; because you don’t know or don’t wish to answer, please state so. All right?”

A statement to which Mr. Milner, seemingly discontent simply replied: “Thank you.”

Taking over, Mr. Shanmugam, expressed his concerns about the regulation of Facebook through internal guidelines only and not external as well.

Mr. Shanmugam then went on a long speech saying, “Let me explain to you why this is so relevant, Mr. Milner. (…) The questions before the UK parliament were very relevant in exploring the degree to which you can be trusted, Facebook can be trusted to answer questions when asked. That a government of Singapore can depend on Facebook to tell us the truth, the whole truth and nothing but the truth in proceedings where the witnesses are sworn or whether you will do everything you can to give lawyers’ answers or lawyered answers. 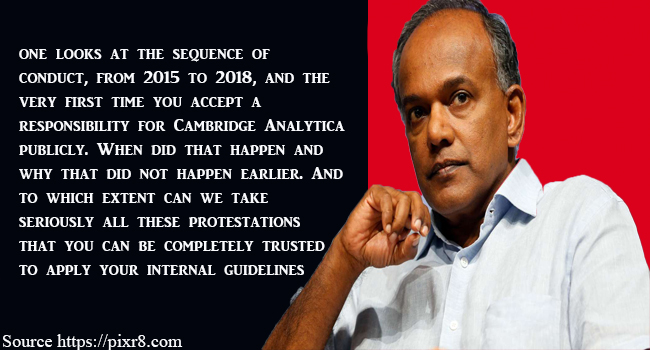 “Why are we looking at these answers? We are looking at our national security, the consequences we’ll have. By looking at your answers elsewhere, it is clear and you have confirmed, you will not decide whether something is true or false, you will not take down something simply because it is false, you will take it down whether there is a legal obligation on you. And your argument, through the written representations, through the public statements, through all public positions that you have taken, in essence, is that you will prefer to be regulating yourself with your internal guidelines. (…) That you do not want to be regulated. In that context, we are asking you these questions. If you are embarrassed about being confronted with answers that your colleagues have given to other parliaments; you can say so. If you feel unable to support them, of course, you can say so. But I think you will leave the relevance of the questions to me and for me to be directed by the chair. Can we move on?”

Mr. Shanmugan then carried on saying, “The reason for asking your comments on Senator Mark Warner’s comments is very simple: The same thing can happen in Singapore: a serious foreign interference. This is a very senior legislator in the United States. He makes these comments after listening to your very senior colleague who I assumed, or who would have been expected to have been helpful to the American congress, and the American people. We know our position as Singapore in the world. We are not the United States of America. If a very senior legislator in the United States feels that you are not being corporative, then, how do we expect that you will be corporative with us? But these are issues that we are entitled to explore. You understand why some of these questions are being asked. You may not like them, you may not want to answer them. But there are reasons why we are asking and everything is related to the impact deliberate online falsehood can have on us; to what extent can we rely on you being voluntarily helpful, to what extent can we rely on your actions being helpful. To what extent does the government have to intervene? That really depends on an assessment of what you do elsewhere in the world. And what other people, particularly senior people, journalists, newspaper articles have subbed about your conduct. It is highly relevant.”

Moving on to the next question, Mr. Shanmugam pointed out that tech companies “were not committal in some of their answers including on the issue of banning foreign currency in political acts.” He also pointed out in case Mr. Milner was not aware that Singapore “does not allow foreign interference in our (Singapore) elections.” He outlined that this law made the question relevant. He further stated that the answer of Mr. Miller is important because “if you are dismissive, that tells us something. If you are serious about it (…) that also tells us something about it.”

Mr. Miller: Our CEO and founder (Mark Zuckerberg) has laid out a very clear plan of action, of what we are going to do as a company, to help to address the understandable concerns about the integrity of elections around the globe including here in Singapore. In an interview to CNN, he (Zuckerberg) talked explicitly about concerns about the US mid-term elections, but also he talked about elections in India and in Brazil. So we know we have a global responsibility to do what we can to try to protect and prevent the abuse on our platform in terms of undermining integrity during the elections. That includes working with national authorities as it was in public and behind the scenes, because much of this work has to be carried out behind the scenes when it comes to cybersecurity to do what we can to try and prevent what happened in the US elections of 2016; to prevent that from happening again on our platform.

The Home Affairs and Law Minister then changed the subject to address the issue of establishing a policy regarding “foreign currency payment for political advertisements”.

Mr. Miller immediately responded to this question stating, “We have a policy of complete transparency but we do not yet have that policy.”

An answer that led Mr. Shanmugam to conclude that Facebook must be judged “by actions and not by the statement”