It is being strongly believed that Patanjali’s Kimbho has been created to give a tough competition to the most popular messaging platform, Whatsapp Messenger and also to other similar apps. The tagline of this Indian application says “AB BHARAT BOLEGA”, which in English, means ‘Now India will speak’. The all-new app is thus, being promoted as the “swadeshi messaging platform”.

The news was confirmed as SK Tijarawala, Patanjali’s spokesperson tweeted, Now Bharat will speak. After launching SIM cards, Baba Ramdev has launched a new messaging application called Kimbho. Now Whats App will be given competition. Our own #SwadeshiMessagingplatform. Download it directly from Google Play store.

Patanjali’s Kimbho includes all the important features that one will contemplate from any highly-advanced messaging application. 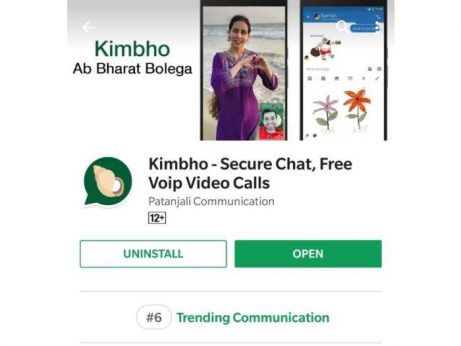 Features of Kimbho: A Swadeshi Messaging Platform in Making

1) An interesting feature is Ghost Chatting. The message marked with this option will disappear within a few seconds. The sender can choose the Ghost option before sending the message.

2) It enables the users to apply different themes and personalize the application.

3) Another feature is quickies where the app will itself adjust or preset messages and the user will not have to type in texts.

4) The people can use it for personal as well as group chats.

5) Similar to Whatsapp, the app also provides the feature of creating audio calls and video calls to people around the world.

6) Apart from this, one can share images, videos, audios, GIFs, location, stickers and doodles.

Also talking about the Swadeshi Samriddhi SIM cards, they can be recharged at very reasonable offers, but, at present, only the Patanjali employees and office bearers can make use of these benefits. However, after the complete launch of the SIM cards, the country’s population will get 10% discount on Patanjali’s products with the SIM cards. The SIM card will also be coming with medical insurance of Rs 250,000, and life insurance cover of Rs 500,000. In this regard, Baba Ramdev stated that there are five lakh counters of BSNL and people can very soon get Patanjali’s SIM cards from there.

Tijarawala through one of his tweets also stated about the meaning and reference of the word Kimbho. Kimbho, in Sanskrit, is used as a phrase which means asking someone about their well-being and how they are.

The application is registered under Patanjali Communications and uses conch as the icon with a green background.  As of now, the app has 1000 plus downloads. Although users have reported some problems regarding sending and receiving messages, the developers might work on fixing it. The new app, which is 40MB in size can now be downloaded for free on Google Play store.