After Paytm, Google Tez, Hike and PhonePe like platforms that provide online peer to peer transactions and more, have rolled out, millions of users have moved to electronic payment interface thus expanding the Digital Payment Space.

But what is expected to make Digital Payments in India to progress to $1 trillion from $51,756 million (2018) by 2023, is the entry of global players in the country’s automated space, as mentioned by investment banking firm Credit Suisse in a report.

“Digital payments (in India) currently aggregate less than USD 200 billion, of which mobile is still at just USD 10 billion in financial year (FY) 2018 E (estimated) . We estimate that the total digital payment market in India will grow to USD 1 trillion by FY23E led by the growth in mobile payments,” the report said.

With WhatsApp soon updating its feature of peer to peer transaction to all users in India, the growth of e-transactions is anticipated to advance quickly.

After months of expectations, WhatsApp the most used messaging app in India, has released its feature of digital payment service in India to selected users for the time being. The payment services uses the Indian government’s Unified Payments Interface(UPI). This can be made possible, as WhatsApp garners most of India’s population of almost 250 million as they are dependent on mostly 2G networks. Thus, giving WhatsApp the advantage of Numbers. 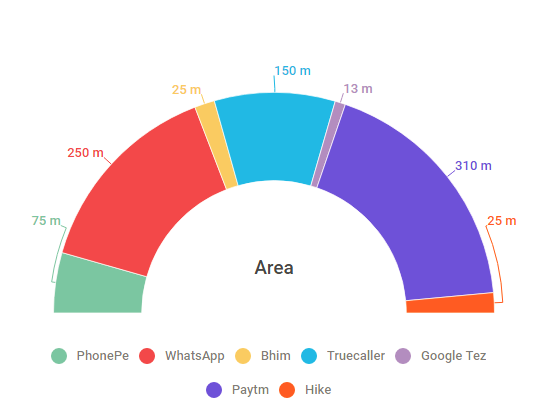 Competing Platforms and their User bases

“Payment integration in to popular apps in India will drive the digital payment market in India to USD 1 trillion over the next five years. Digital payments in India are soaring on the back of the entry of global tech giants that are acting as aggregators for retail transactions.”

Not only this, the report which is prepared by research analysts Ashish Gupta, Sunil Tirumalai, Kush Shah, Anurag Mantry and Viral Shah says that mobile payments in India are being built on public infrastructure like UPI and Aadhaar that allow open-architecture and an inter-operable payment system to evolve.

The account by the research analysts also cited trend of digital payments in China as example, where digital payments in Asia’s biggest country leapfrogged to over $5 trillion in the past four years on the back of rising mobile and data penetration.

The report by the investment banking firm also mentions that in spite of growing digital payments in India, there is no loss of customers for the banks, as they perform transactions on applications, on account of aggregators and the bank keeps track of the customer data.