Taptu, a free online RSS feed reader, that also has apps for Android, iPhone, iPad, BlackBerry, and Nook is going to shutdown its services on this 31st, three days down the line. The shocking news can easily be seen on the front landing page. 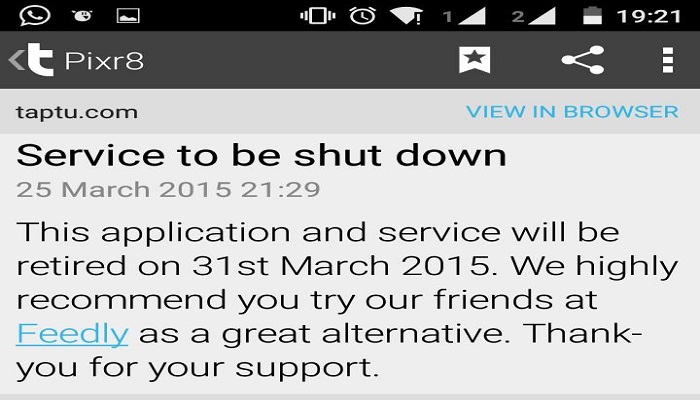 Taptu, which combines RSS with a magazine-like layout and the option to include feed content from big-name media outlets and your own private social media streams, gained particularly after the retirement of Google reader. The most dominating and attractive part of Taptu is the way they personalized the news for the users.
As its tagline suggests, Taptu allows users to mix and match their RSS feeds via a DJ button located at the top right of each content “stream” (basically a subfolder of one or more feeds). Once in this DJ mode, users can drag and drop individual feeds into streams, dress the feeds up via an unnecessarily prominent color-switching module, and move the streams around within the main viewing area. The service is big on organization, but that’s where its appeal ends.

Let’s take a look at the main features:

As the landing picture says it all, Taptu is suggesting it’s users to use Feedly as a great alternative for Taptu. Feedly, which is an open system, allows you to add any RSS feed and easily read the content of your favorite feeds on the go. Just enter the URL of a feed in the search bar and there you go!