Axilor Ventures today announced that Kris Gopalakrishnan will be taking over as its Non-Executive Chairman.

Kris Gopalakrishnan, co-founder of Infosys and its former Vice-Chairman, is recognized as a global business and technology leader. Kris was selected to Thinkers 50, an elite list of global business thinkers, for the year 2009. A Padma Bhushan awardee, he was elected president of India”s apex industry chamber Confederation of Indian Industry (CII) for 2013-14, and served as one of the co-chairs of the World Economic Forum in Davos in January 2014. He serves on the Board of Governors of IIT-Madras, IIM Bangalore and is the Chairman for the Board of Governors of IIIT-Bangalore. 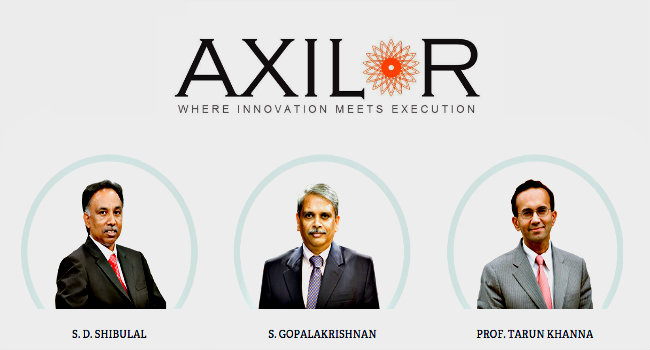 On taking over as the Chairman, Kris Gopalakrishnan said,

‘Axilor Ventures helps startups to improve their odds of success and I look forward to supporting the executive management of Axilor with this vision.’

Axilor Ventures was founded in November 2014 by Kris Gopalakrishnan, S D Shibulal, Prof Tarun Khanna, Srinath Batni and Ganapathy Venugopal, to serve as a platform for supporting innovation and entrepreneurship and help early-stage entrepreneurs improve their odds of success.

‘Axilor aims to energize the start-up ecosystem in the country. Kris’ vast experience in technology and innovation will be of tremendous value in guiding Axilor achieve its vision.’

Since its inception in November 2014,

Axilor has launched its three programs to support entrepreneurs – the Accelerator Program, Scale-up program (with access to seed fund) and Early Stage Funding program. Operating out of its new 20,000 sq. feet campus in South Bangalore, it has successfully graduated its first batch of startups from its Accelerator Program.

Having successfully graduated its first batch of startups in June, Axilor recently opened its applications (www.axilor.com) for the second batch of its Accelerator Program. Axilor’s CEO, Ganapathy Venugopal commented, “Most startups fail and often, do so for predictable reasons. Through our unique program structure, the Accelerator program helps entrepreneurs improve their odds of success during their earliest days, which is when they need it the most. We are looking for gritty entrepreneurs with disruptive ideas in e-commerce, healthcare and cleantech.” The second batch is due to start in September 2015 and the applications are open till 10 August 2015.