“Our very strong revenue growth in Q4 reflects the vibrancy of our business, driven by mobile search as well as YouTube and programmatic advertising, all areas in which we’ve been investing for many years. We’re excited about the opportunities we have across Google and Other Bets to use technology to improve the lives of billions of people,” said Ruth Porat, CFO of Alphabet.

For the first time, the company disclosed the profitability of Google’s search engine and its other online services, and how much it is spending on ambitious technology projects such as self-driving cars. 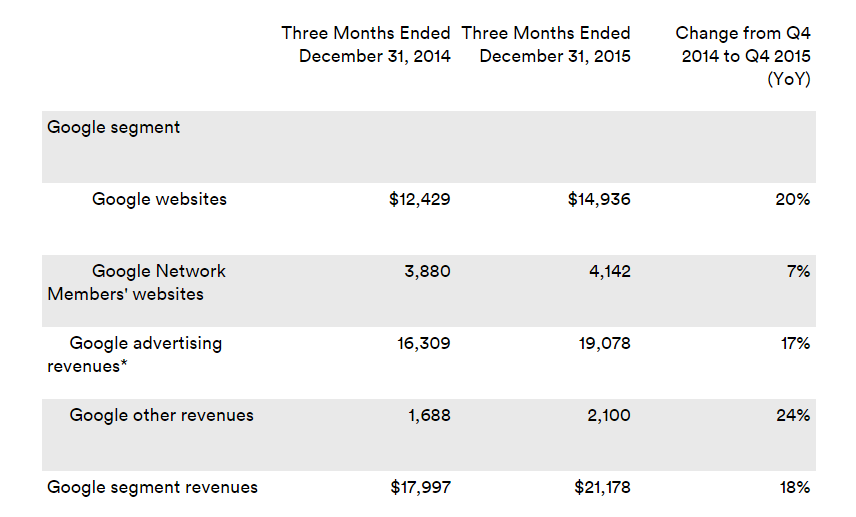 “It’s pretty interesting that 80 percent of YouTube views come from outside of the United States. I didn’t think it would be that high,” said Kevin Kelly, managing partner at Recon Capital. “It demonstrates that the value of YouTube can continue to be extracted,” he said.

The operating profit margin for its Google unit was 31.9 percent in the most recent quarter, compared to 25 percent for Alphabet.

Alphabet spent $869 million on capital expenditures for the Other Bets in 2015, up from $501 million in 2014. It has not made any projections about if or when those bets cumulatively would become profitable.

He also touted the company’s performance during the holiday shopping season, saying that programmatic video impressions doubled this season compared to last, and that 60 percent of them came from mobile devices.