On Wednesday, our honourable Prime Minister Narendra Modi had a live conversation with the startups across the country who have benefited from the Startup India Policy as well as with student innovators who are a part of Atal Innovation Mission’s Tinkering Labs. With the aim to promote young entrepreneurs in the country, the prime minister focused his conversation all over the growth and funding of the beginners in the field of business.

During the interaction, Modi showed his appreciation by clapping impulsively at some of the comments and ideas of the entrepreneurs, and even when some of the government’s schemes were highly praised by the participants. In this regard, he said a few important things about startups that are worth nothing.

Startup India Highlights: What PM had to Say? 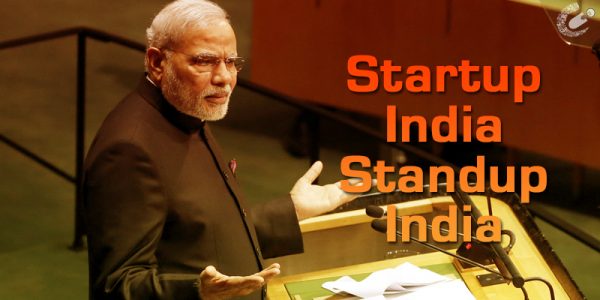 While interacting with the entrepreneurs through the NaMo App, PM Modi said that the government has tried to push startup culture down to Tier II and Tier III cities along with rural areas which were earlier limited to Tier I cities.

Elaborating on the same he said,

India is a young country where 65% of the population is aged less than 35 years, and we are enabling them to think of innovative solutions. Further, we have tried to localise the startup innovation culture and you will be surprised to know that till now 44% of the startups are found in Tier II and Tier III cities, today. These startups have been founded across the 419 districts of India. Moreover, almost 45% of the startups are founded by women entrepreneurs.

1. From IT sector to Agriculture – PM Modi’s words were worth noting when he told that at initial stages, only the IT and digital sector saw a growth in startups, but eventually, we changed the mindset and the startups are also emerging in the field of agriculture and manufacturing.

We have started an Agriculture Grand Challenge. We invite more youngsters to ideate on how to transform our agriculture sector, he said.

2. Encourage innovative thinking and mindset – Today’s big companies were start-ups at some point. Modi said that he wants to inculcate an innovative and out of the box thinking in the minds of the children from a young age only and that is the only aim of the Tinkering Labs. He believes that the young talent is the future of India and must be given a special attention.

The best way to ensure that is to make sure that students are given the right tools, and equipment and mentorship to put their creative minds to use, he said.

3. Ensuring enough funds for Startups – The PM focused on the importance of investment for a startup and mentioned about the ‘fund of funds’ scheme. He told that most of the funds will be invested through the Small Industries Development Bank of India (SIDBI).

He said, We’ve committed over Rs 1,200 crore to different alternative Investment Funds (AIFs) that have been able to catalyze over Rs 7,000 crore worth of investments towards startup funding.

4. Ease of starting Business – Modi said that earlier there were a lot of rules and regulations that could not allow the startups to grow but now the changes have been made to encourage their growth. For example, the rules like the experience of 10 years before applying for a government project have been relaxed and complicated application procedures have been made simpler and easier. He also insisted the government officials trust young talent of the country.

If a startup isn’t given a project, how will they gain experience, he asked.

5. Public Procurement Norms – Explaining the measures being taken by the government, Modi said that the Government-e-Market Place (GEM) has been linked to Start-Up India portal so that start-ups can sell their products to the government. The government has also started a one-stop digital platform called Start-Up India Hub where all information regarding start-ups and its ecosystem is available for entrepreneurs. Also, the startups have been given income tax exemption for three years.

Through a mass movement, let us celebrate innovation and out-of-the-box thinking. If you know about the life journey of any innovator working at the grass-roots level, share it using #InnovateIndia. Lets continue this momentum and further cement India’s position as a start-up hub pic.twitter.com/f6NVuk0PxE

Narendra Modi believes that there are certain initial challenges that the startups have to face but, with time the government will bring in more changes and strategies for easier growth and expansion of the new talents.  At the end of the interaction, the Prime Minister gave a clear and loud call to the nation to make ‘Innovate India’ a mass movement.

He encouraged the citizens to share their ideas and innovations through the hashtag #InnovateIndia.

The Prime Minister of our country has taken some much-needed steps in the startup space and it is being strongly hoped that these schemes prove to be successful and help the startups to flourish in the economy.