The shrimp manufacturers and exporters which were leading the Indian stock market for a while have now baffled investors after witnessing a sharp fall in share prices which has been considered too high to measure.

Yesterday, a news has surfaced that shares of shrimp exporter Avanti Feeds which grow 40000% in last 5 years have lost 38 percent of their market value since April 26. And today, adding to the misery of investors, shares have gone further down by 12.27% and are currently trading at Rs 1,306.90 down from its previous closing of Rs 1,489.60 on the BSE on the back of heavy volumes.

Apex Frozen, on the other hand, is a leading integrated producer as well as exporter of shelf table and ready to cook products. It supplies products to food companies, retail chains, restaurants, club stores and distributors spread across the developed markets of USA, UK and various European countries. The company currently has a Growth CAGR of around 30 percent.

Talking of shares, in particular, it is now very difficult to make any prediction as the stock has been in a series of lower circuits from last 2 months. 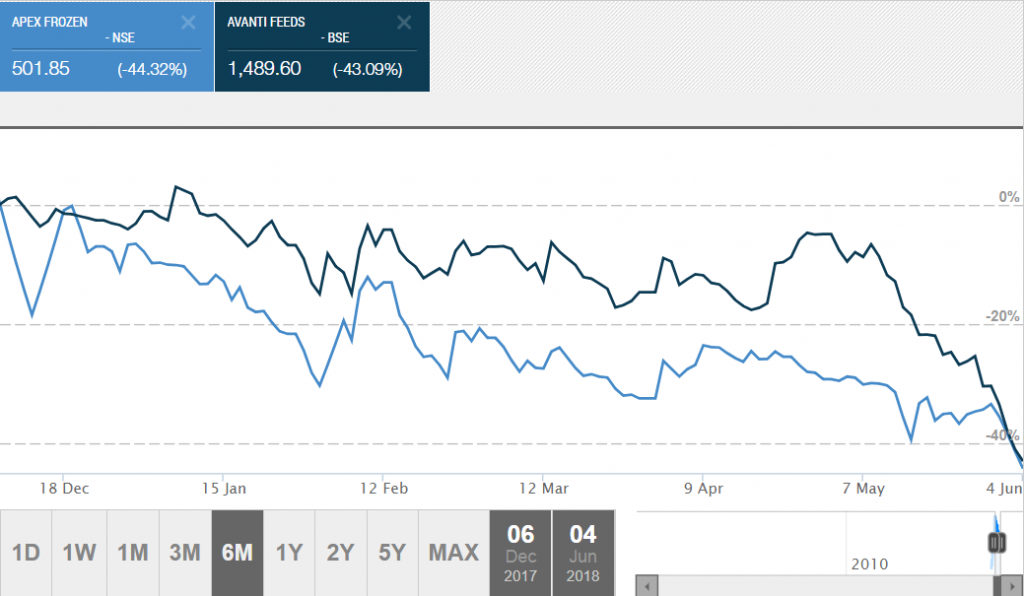 1. It is noteworthy to know that any share which gives multi-fold returns need to enter into correction stage sooner or later, and the same has happened with Avanti Feeds and Apex Frozen.

2. Looking at the performance of last 3 quarter the share is available at PE of 20–22 (considering the same performance Q4).

3. The main market for these companies is the USA. Presently, USA is exploring different ways to reduce imports by increasing duties on shrimp imports. This may be one of the major setbacks for Indian exporters.

To some extent, the effect may be contained by raising dollar price. However, there is a long-term export problem. The stocks have also run too much and hence no more accumulation might not happen, making them less attractive for the buyer.

Hence, we see there can be many factors attributed to sharp fall in mid and small cap stocks such as persistent selling by foreign investors and institutional investors, unsustainable high valuations, decreasing rupee value against the dollar, a sharp increase the crude prices.