We all know him as the first Indian Army officer to be promoted to the rank of Field Marshal- Sam Hormusji Framji Jamshedji Manekshaw, popularly known as Sam Bahadur. As the Chief of the Army Staff, Sam’s service to the nation is immense as he united the army, navy and air force into a team, helping India win against Pakistan in 1965 and even more significantly the 1971 Indo-Pakistan war that led to the liberation of Bangladesh.

For his services, he was awarded the Padma Vibhushan and the Padma Bhushan, the second and third highest civilian awards of India.

What we might not know, is that he was the only person in his family who never graduated; managed to do his inter-science with a third division, and that too “Mushkil se” according to him. But we need no reminder of his distinguished military career, spanned for four decades and five wars.

Though Manekshaw initially thought of pursuing a career as a medical doctor, he later joined the first intake of the Indian Military Academy (IMA) when it was established in 1932.

In his experience, he saw several shortages, shortage of work, hospitals, quality education and the primary shortage, which is often ‘glossed’ upon is the shortage of Leadership! 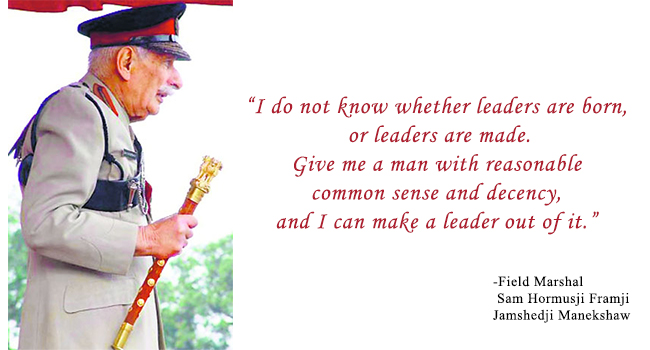 Nobody is born with professional competence, even if he/she is the son/daughter of a Minister, member of Parliament or even of a Field Marshall. It has to be earned through the hard way, a constant study of profession. We should not think of ourselves as a repository of knowledge even if we reach a certain stage.

No Professional Competence = No Leadership

“You have to have professional competence if you have to lead anything!” 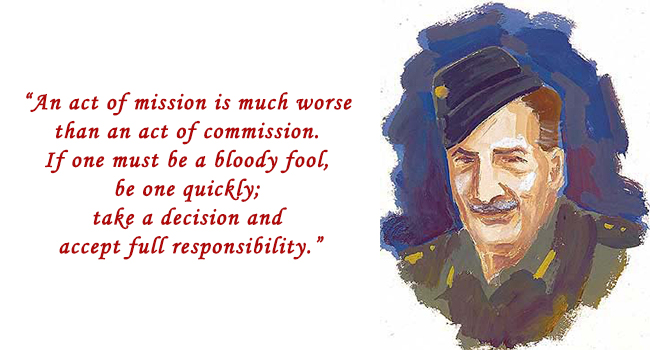 Manekshaw points out at the fact that much money is wasted in the country just because nobody is taking a decision. 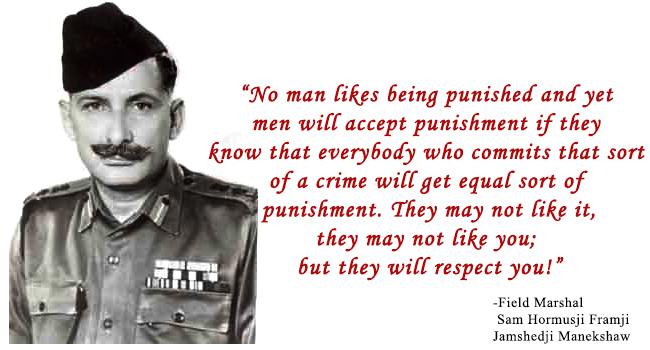 Which is very common problem in our country and most of us lack that courage of responsibility.

“A yes man is a horrible man. He may rise very high, but he will never-ever become a leader.”

Manekshaw himself led many examples that showed his moral courage. For example, it was 1970 when General Yaya Khan put all the pressure on East Pakistan and refugees started coming to India. On 28th April, Manekshaw was summoned by India’s Prime Minister then, Indira Gandhi to ask what his steps were about it.

Refugees in Bengal, Tripura and Assam were increasing in high numbers making it difficult to look after the state. She asked Manekshaw to “Go in and take action” which would have led to a direct war. Besides getting the direct orders, Manekshaw refused to carry out the orders saying “We are not ready”, with the monsoons the whole region would have become like swamp, making it very difficult to fight. Considering the threat from China, and the time of year (harvesting in Agriculture during that month), he was immovable on his decision. “If you want me to do this Prime Minister, I guarantee you 100% defeat.”

Being the army chief, it was his sole duty, his moral courage to tell the PM about the outcomings. Manekshaw realized that this is where she might dismiss him, but his will and strong moral courage, made him Field Marshal at that point.

“Any man who says I have no fear is a liar (probably except Gorkha). Fear is a natural phenomenon like hunger and sex! It is one thing to be frightened and another to show fear.” 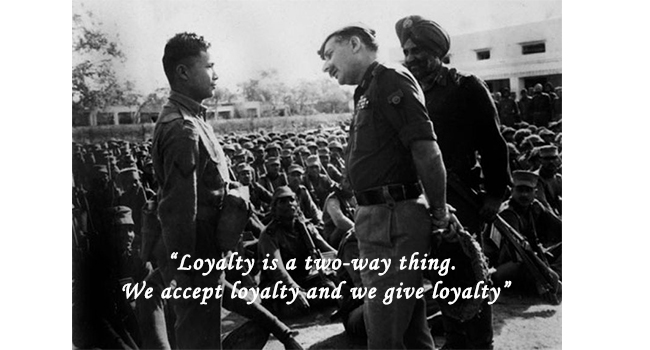 Besides accepting loyalty, one must be very strict about giving loyalty as well. 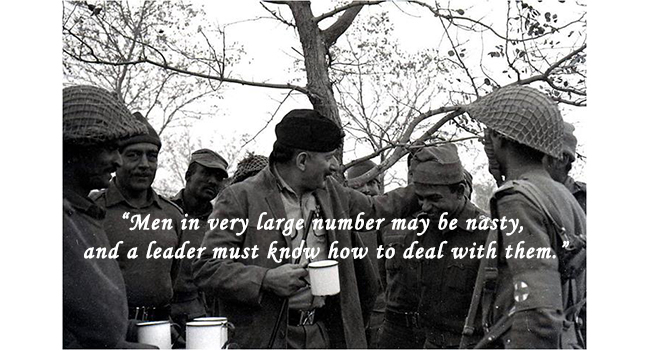 When people start creating problems, one cannot cross hands and say “Jai-hind”. We ought to deal with them very “firmly”, but never forget that they are humans, and humans have humane problems, like family, death etc. and therefore a leader must have a “human touch”.

Discipline is a code of conduct for decent living in a society, one with the other. This code of conduct has come from fathers to son, mothers to daughters, bible to us, it’s in Geeta, it’s in Quran, words of Nanak and it has been refined as cultures have changed. 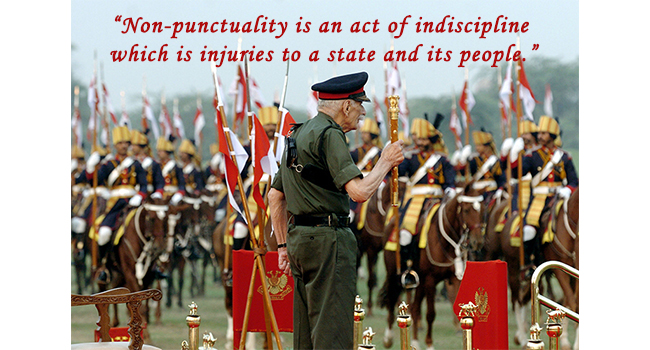 A leader must know what he/she really is. Not get driven by the power and popularity but by his duty.

We all cannot be perfect at everything we do, there are mistakes that are bound to happen. But what we can do is not to forget our sole duty and work in a way, for the upliftment of our society and thereby, our country.