Microsoft founder Bill Gates was all praises for the company’s Indian-American CEO Satya Nadella, saying he has successfully charted a course for making the most of the opportunities created by technology and helped the IT giant to stand out in the computing industry.

In stepping out of the long shadow of former Microsoft leaders Gates and Steve Ballmer, Nadella has already accomplished what seemed impossible, increasing Microsoft’s market share by USD 250 billion since taking control.

“It was no surprise to me that once Nadella became Microsoft’s CEO, he immediately put his mark on the company. As the title of this book implies, he didn’t completely break with the past when you hit refresh on your browser, some of what’s on the page stays the same,” Gates writes in his forward to Nadella’s “Hit Refresh”. 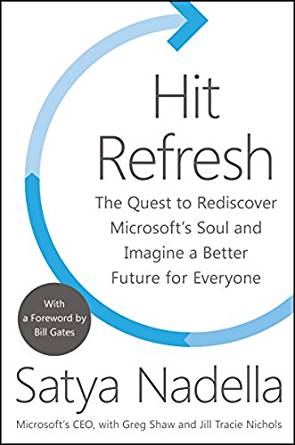 The book Hit Refresh: The Quest to Rediscover Microsoft’s Soul and Imagine a Better Future for Everyone, authored by 50-year-old Nadella, who is only the third-ever CEO of Microsoft, hit the stores this week.

Under Nadella’s leadership, Microsoft has been able to transition away from a purely Windows-centric approach, Gates writes.

“He led the adoption of a bold new mission for the company. He is part of a constant conversation, reaching out to customers, top researchers and executives. And, most crucially, he is making big bets on a few key technologies, like artificial intelligence (AI) and cloud computing, where Microsoft will differentiate itself,” he said.

It is a smart approach not just for Microsoft, but for any company that wants to succeed in the digital age, Gates observes.

Noting that the computing industry has never been more complex, he said that today lot of big companies besides Microsoft are doing innovative work-Google, Apple, Facebook, Amazon, and others.

There are cutting-edge users all around the world, not just in the US.

The computer is no longer the only computing device, or even the main one, that most users interact with, he said.

“Despite all this rapid change in the computing industry, we are still at the beginning of the digital revolution. Take artificial intelligence (AI) as an example. Think of all the time we spend manually organising and performing mundane activities, from scheduling meetings to paying the bills,” he wrote.

“In the future, an AI agent will know that you are at work and have ten minutes free and then help you accomplish something that is high on your to-do list. AI is on the verge of making our lives more productive and creative,” Gates said.

Innovation will improve many other areas of life too, he argued.

“It’s the biggest piece of my work with the Gates Foundation, which is focused on reducing the world’s worst inequities,” he said, adding that digital tracking tools and genetic sequencing are helping get achingly close to eradicating polio, which would be just the second human disease ever wiped out.

Gates says Nadella has charted a course for making the most of the opportunities created by technology while also facing up to the hard questions.

“And he offers his own fascinating personal story, more literary quotations than you might expect, and even a few lessons from his beloved game of cricket. We should all be optimistic about what’s to come. The world is getting better, and progress is coming faster than ever,” Gates wrote.