Mukesh Ambani, the Chairman and Managing Director of Reliance Industries, met with Amaravati Chief Minister N. Chandrababu Naidu on Tuesday at the state. For the first time, any of such discussion was done live on Facebook, which was viewed by over 3 lakh people thus maintaining transparency. They discussed on matters of e-governance, investment opportunities and business.

Andhra CM opened the discussion with him, explaining about what they do and his team has achieved since years. He explained that how everything is done electronically in Andhra Pradesh and said he desires to do every process at one platform which makes the work easy and hassle-free.

His system seemed so impressive to the RIL chairman, that he asked the CM jokingly to “expose this system to the whole of India.” which if done can actually make India free from many problems.

CM Naidu explained about the working of e-pragati saying that he can track the attendance and performance of employees and number of days being taken by each Minister and different departments to dispose of files. This prestigious project is seriously making headlines in the south and with citizens of the state regarding him to be the best Chief Minister of India and desiring him on the Prime Minister’s position. According to Mr Naidu, this is the only state among the whole of the world who has made it possible to perform so many tasks at one platform. 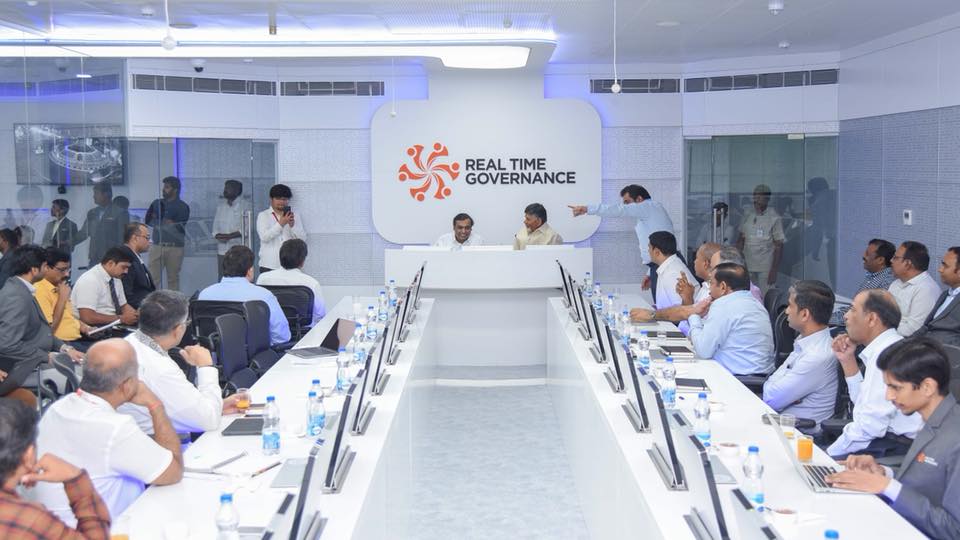 Further moving deep, the street lights are sensor based, the traffic lights are all well functioning based on real time. Mr Naidu says that everything is monitored real time like the temperature, distribution and possibility of rainfall, the change in air quality, reservoir status (how much water is available in the reservoir) so that action can be taken immediately. These functions can prevent the state from future disasters. He also briefed about print media, social media etc. The prominent feature about the project, that many people dont know about is the Just Dial facility 1100, where people can highlight there grievances relating to any matter such as corruption. This number can be dialled by any person across the state reporting of any government official asking for bribe and can get their money back. Such a method will ensure a corrupt free state.

Mukesh Ambani was so impressed by the technological advances made by the CM Naidu saying, “Very few people are able to convert vision into reality” , he congratulated the CM for coming such a long way and thus offered his support for the need of private capital along with public capital for the development of Amaravati. He expressed his interest in investing in various sectors such as health, education and agriculture sector.

The duo also talked about the partnership summit to be held in Visakhapatnam later this month, where Mukesh Ambani indicated setting up of Jio phones manufacturing unit in Rayalaseema region of Andhra, and creating 100 entrepreneurial industries.

The discussion involving the richest man in the world and the richest CM in India can result in certain benefits for the State. Although, it seems to be a dream to the rest of India to expand such a technological advancement for the whole country.

It is believed that maybe Ambani is acting as a mediator between the Centre and Andhra Pradesh as he is considered to be close to both the Prime Minister Narendra Modi and and Chief Minister Naidu and can resolve the issues that have arised due to the budget allotment to the state.

The RIL chairman appreciated the CM’s efforts he has implemented on the state and says you are way ahead of us. He believes that India could prosper in new digital world and says –

“Lots of people talk about ease of doing business. I think the real opportunity to grow is ease of living and equal opportunity.”