IT Ministry reported plan to rope in private companies like Microsoft and IBM for providing cloud computing services to government departments has come under flak from cyber security experts.

“I think by using cloud services of foreign companies like Microsoft and IBM, IT Ministry has decided to throw all Data and National Security concerns into a dustbin. What has happened to the National Cloud Project of government? We appeal the Prime Minister to intervene and stop this else this will send a wrong message,” Indian Infosec Consortium (IIC) CEO Jiten Jain said.

IIC is Indias cyber security group which has around 4,000 members.

“If the worlds software super power (India) does not have the capacity to even build its own Indigenous cloud infrastructure then where is Make in India,” Jain said. IT and Law Minister Ravi Shankar Prasad tweeted a news report that suggested that private companies such as Microsoft, IBM and others may be roped in by the IT ministry to provide cloud services to government departments. The tweet attracted criticism by social network users who questioned the reported proposal on security grounds.

Microsoft, IBM, among others, to provide cloud services to government departments https://t.co/wA8lBhRFel 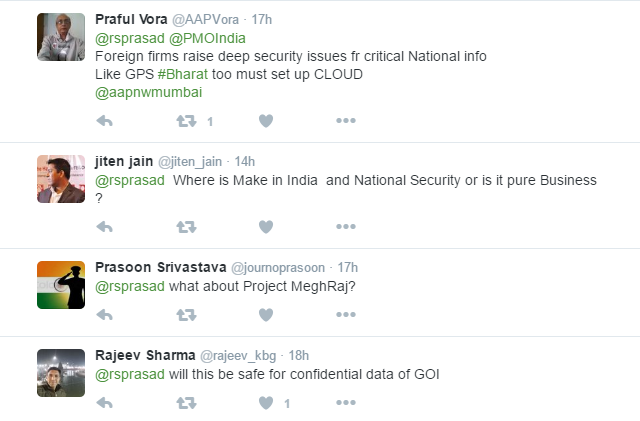 Though there was no official announcement of the reported proposal, no immediate comment could be obtained from the IT ministry over the same. The previous UPA government had launched the National Cloud project which would be managed by its own agency NIC.

“The purpose of the project MehgRaj was to basically to keep data of government managed projects within its control for security reasons and also to help government departments in reducing their time, capital and operational expenditure in implementing e-governance services,” an official involved in the project MehgRaj said.

Government has earmarked over Rs 1,000 crore for Meghraj under which the Department of Electronics and IT will have to set up datacentres and develop IT applications for all central and state government departments to roll out e-governance services.

How Does the Casino Industry in India Compare to Other Places on the Planet?

Paypal to shut down its India Operations