The International Monetary Fund (IMF) has projected that India will be the fastest-growing major economy in 2018, with a growth rate of 7.4 percent that rises to 7.8 percent in 2019 with medium-term prospects remaining positive.

The Report on Asia and Pacific Regional Economic Outlook said that the country is recovering from demonetisation and introduction of GST Tax, and “the recovery is expected to be underpinned by a rebound from transitory shocks as well as robust private consumption.”

Meanwhile, in the broader perspective, IMF has estimated that Asian economies will remain strong within growth outlook but will be vulnerable to a sudden tightening in global financial conditions and a shift towards protectionist policies.

In its regional economic outlook update, IMF has projected Asia to grow 5.6 percent this year accounting for about two-thirds of global growth.

According to the IMF Report,

Asia remains vulnerable to a sudden and sharp tightening of global financial conditions, while too long a period of easy conditions risks a further buildup of leverage and financial vulnerabilities. 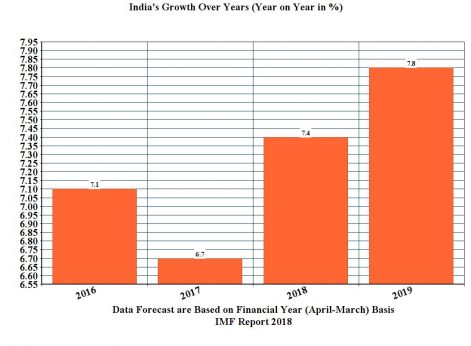 Talking of other risks, the Fund cited cyber attacks, geographical conditions and global change. On longer terms, ageing demographics could lead to a substantial drag on economies and digitalisation might result in uncertainty. Most economies should henceforth work on strengthening policy buffers as closing gap output will lead to the perception that they do not need any further fiscal support, said the Fund.

The report further concluded that pressure on wages and prices is still “moderate” hence the monetary policy should remain accommodative in Asia. But the central banks need to stand tall to adjust their stances as inflation is picking up rapidly.