Indian industrialist and investor, Ratan Naval Tata who is well known as the former chairman of the popular conglomerate Tata Sons (one of the two holding companies of Tata group). Ratan Tata has done a commendable job in terms of investment activities and has been taking a keen interest in the Indian Startup ecosystem. With the help of his private investment company RNT Associates, Tata has marked his footsteps on various startups in the country. Though most of his investments are undisclosed amounts, it is a big honor for startups that are successful in bringing Ratan Tata on board.

Also, you might be thrilled to know that Tata has been honored with the Padma Vibhushan in 2008 and Padma Bhushan in 2000, the second and third highest civilian honors awarded by the Government of India.

Ratan Tata, as an investor, has invested funds in various companies including technology startups. Here, we will talk about several tech-startups that he has backed in his personal capacity.

The Chinese electronics company Xiaomi, which is the most popular smartphone brand in the Indian market has been backed by Ratan Tata lately. You might be amazed to know that Tata is the first Indian to purchase stake in the smartphone company.

Xiaomi is well-known for offering budget friendly smartphones to customers all around the world and specially in India. Along with smartphones, the company also manufactures tablets, earphones, laptops etc. Talking about the details of the deal, the amount of the investment has not been disclosed as of now.

Tata has also invested funds in one of the world’s largest ride-sharing companies Ola. Ola is an Indian origin online company and is extremely popular in our country for the purpose of transportation.

Ratan Tata backed the company in 2015, after five years of its establishment. Tata’s venture capital firm RNT Capital Advisors also made an investment of Rs 400 crore in Ola.

Zivame is an online women’s innerwear company that specializes in lingerie.

Richa Kar and Kapil Karekar founded the company in 2011 and soon the platform gained attraction with their unique marketing strategies, and today it has become a brand in itself.

Zivame secured funds in 2015 and these funds were provided by Ratan Tata. The details of the investment were not revealed but the company claimed to used the funds in developing the technology and increasing traffic on its platform.

Who isn’t aware of Paytm these days? Yes, the very popular digital payments giant has also been backed by Ratan Tata. The company raised an undisclosed amount from the investor in 2015 and since then the company is just reaching heights.

Tata picked up a stake in One97 Communications, the parent company of Paytm. With the funding, he also took up the role of an advisor for the company.

The New Delhi based e-commerce company Snapdeal was founded in 2010. After four years of its establishment, He is believed to have picked up a 0.17% stake in Snapdeal in August 2014.

It was the very first e-commerce company that Tata had invested in. Snapdeal’s motive is to create India’s most reliable and frictionless commerce ecosystem that creates life-changing experiences for buyers and sellers and through the funding, it started growing and climbing the ladder of success.

UrbanClap is an online platform that helps the customers to find and hire service professionals easily for their personal needs such as plumbing, electric work, parlour facilities and much more. It is one of the fastest growing early stage startups in India at the present time.

The company has been backed by various investors and Ratan Tata is one of them who invested an undisclosed amount in the company in December 2015. 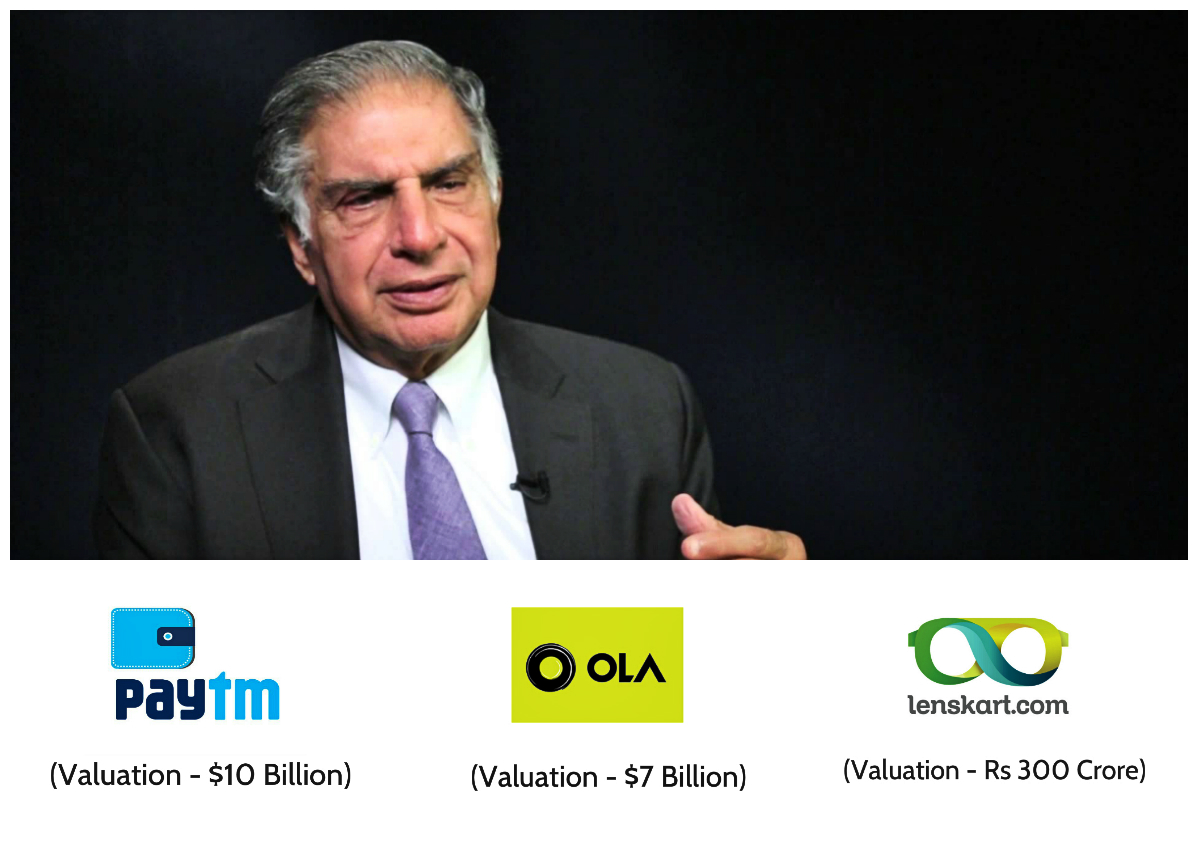 The company secured a considerable amount of Rs 200 crore from the investor which further was used in its expansion.

Tata’s second e-commerce investment was in a popular online furniture platform known as Urban Ladder. The company secured an undisclosed amount from Ratan Tata in November 2015.

Urban Ladder is a popular name in the startup space. It was launched by co-founders Ashish Goel (CEO) and Rajiv Srivatsa (COO) in July 2012 and aims to make a million homes beautiful.

The largest online optical store of India called Lenskart where the customers can buy all kind of eyewear such as contact lenses, spectacles eyeglasses, sunglasses has also been backed by Ratan Tata.

The investor had recently backed the startup in April 2016 with an undisclosed amount. However, an official from the company reportedly said that Tata’s role was more of a mentor/advisor rather than a financial investor.

CashKaro is India’s biggest cashback and coupons website where users can find and make use of various cashback schemes and coupons. After three years of its establishment, the startup raised funds from Ratan Tata in January 2016.

The details of the deal were not disclosed, however, the amount was used in building technology, entering the international markets, as well as for brand awareness and hiring senior-level talent.

FirstCry is an online company that retails baby and kids products. The company has now become Asia’s largest online portal in this segment.

Ratan Tata invested an undisclosed amount in his personal capacity into Brainbees Solutions, the parent company of FirstCry.com in January 2016, six years after the launch of the company.

India’s largest online company for pet supplies, accessories and products for pets called Dogspot has also been backed by Ratan Tata in his personal capacity.

He invested an undisclosed amount along with Ronnie Screwvala. Some other investors in the online pet shop comprised Ashok Mittal, Rishi Parti, Dheeraj Jain and Abhijeet Pai.

Ratan Tata has not only focused on fashion and digital payments company but also on healthcare startups. Lybrate is an online platform that helps find and connect with trusted doctors online and book appointments instantly.

The company secured a valuable amount of Rs 64.8 crore ($10.2 million) from Ratan Tata in July 2019.  The startup offers a mobile-based as well as a computer-based platform for the users.

HolaChef is an online marketplace which curates Chefs ranging from Executive Chefs to Amateurs and allows them creative freedom through their signature dishes.

The company received an undisclosed amount of funds from Ratan Tata in September 2015 which was made in the personal capacity.

Abra is a financial services and technology company that produces a consumer peer-to-peer mobile payment service of the same name.

The company raised an amount of $14million (Rs 91 crore) in series A funding in October 2015 which was joined by Ratan Tata along with investors such as American Express, First Round Capital and Jungle Ventures.

These were the various startups that Ratan Tata has invested in and with the growing funding activities in the recent times, he is expected to back even more companies which will, in turn, help the companies to grow and expand immensely. Not only these companies, but he has also invested in many other ones that have now climbed the ladder of success.

With the help of these investment activities, many companies have been able to make a strong impact on people in India. Ratan Tata, on the other hand, has also received a handsome amount of return from these companies through his funding activities. It might be the brand equity that drove these companies to offer a valuable stake in their business to Ratan Tata.