Drona Aviation was founded by three IIT alumni namely Apurva Godbole, Prasanna Shevare and Dinesh Sain. The company specializes in the building of drones that are meant to be lighter than 100g meant for industrial and civic applications. Presently, the startup is focusing almost solely on drone cinematography.

Up to now, the startup has only developed one prototype of Nano drone called Pluto which is a quick, robust and light drone with an open source firmware and a durable design that is easy to control when operated through a smartphone application.

The Mumbai-based startup does not limit its business to the manufacturing and designing of drones but also conducts various workshops at schools in Mumbai with the hopes of educating them and spread awareness about Drones as technology. They also want to sensitize the younger generations about flying their drones safely and responsibly. 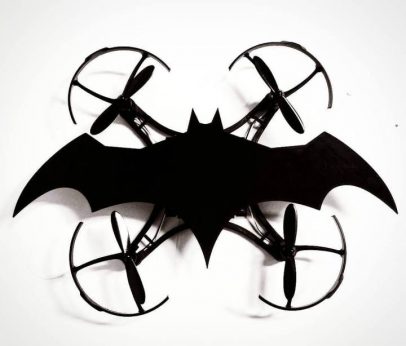 The Bat-Pluto inspired by Batman

Drona Aviation usually attends college Tech-Fest with a Drona Aviation stall/Experience Zone set up to showcase their drone to the crowd. They were also installed at Mumbai Comic Con where their Bat-Pluto and Captain America Pluto stole the show and won the hearts of the Comics enthusiasts. The company also began organizing drone races in events known as PRL (Pluto Racing League) and are looking forward to begin the second season of their own league.