Chinese internet giant Tencent Holdings has left Facebook Inc behind it and has become the world’s most valuable social network company. Tencent is the company behind China’s popular WeChat messenger and is the first company in China to be worth more than $540 billion. 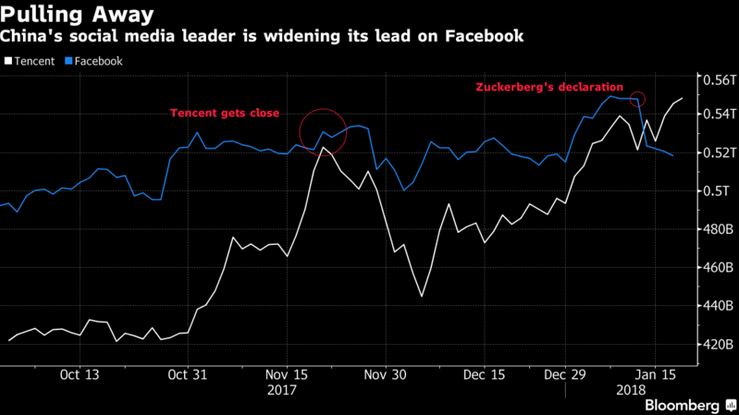 Tencent was started by Ma Huateng (aka Pony Ma) along with his four friends- Chen Yidan, Zhang Zhidong, Xu Chenye, Zeng Liqing in 1998. Its first product was launched in 1999 which was a free instant messaging PC service – OICQ (later renamed as QQ). The platform was a major hit and it secured over one million users within a span of just one year. The company, however, remained unprofitable til 2001, when it launched its mobile messaging platform MobileQQ. Tencent for the first time generated a profit of $1.2 million against its $5.9 million revenue. In 2004, the company listed itself on Hong Kong Stock Exchange.

Later in 2011, Tencent launched WeChat, realizing the huge smartphone users’ interest. Since then, WeChat has come a long way and is more than just a messaging platform now. It has become a solution for a basic user with features like- official accounts, payments services, gaming center and many more.

In a time frame of five-years (2011-2016) the company had a CAGR of more than 40% and took help from a lot of catalysts that helped the company grow.

Tencent has now become the China’s first corporation to be among the world’s biggest after Apple, Alphabet Inc (parent of Google), Microsoft, and Amazon.

Tencent’s approach for money making has so far been counter-intuitive to the traditional business ways. In contrast to the traditional ways of first creating a product or service and then seek customers, Tencent started with a distribution platform and acquired a good number of customers before it moved to monetize from the diverse options available, something similar to what Facebook did.

The revenue streamed mainly from smartphones and PC-based gaming and from digital content, membership subscription and selling virtual goods on its social media platform. This accounted for 70% of the revenue while the rest came from online advertising and e-commerce.

Over the past few years, Tencent has also focused on gaming sector that controls the key to its revenue generation. It has been investing huge amounts in gaming platforms acquisition overseas and buying stakes of gaming platforms, thereby becoming the world’s largest online gaming company– controlling a 13 percent market share.

Even in mid-2017, Chinese govt accused the company of causing gaming addiction with its mobile game Honour of Kings, the biggest game ever in China, and thus, it had to limit the number of hours a user can play.

It is noteworthy that even after such customer acquisition, Tencent has not been leveraging it to run ad campaigns on WeChat , however, it already has other revenue streams from where it is focusing on. The total ad revenue in 2016 is just 18%, but the revenue has increased at more than 50% YOY since 2013.