Deepak Parekh, the Chairman of Housing Development Finance Corporation Ltd. (HDFC) stated in his annual letter to the shareholders that now, he will give utmost importance to succession planning and that will be his priority. The main purpose is to ensure a smooth transition within the HDFC group.

While this session, Parekh claimed that the succession plan would take around 18-24 months for preparation. He also stated that the boards of the respective companies will consider both internal and external sources of recruitment for filling the positions. 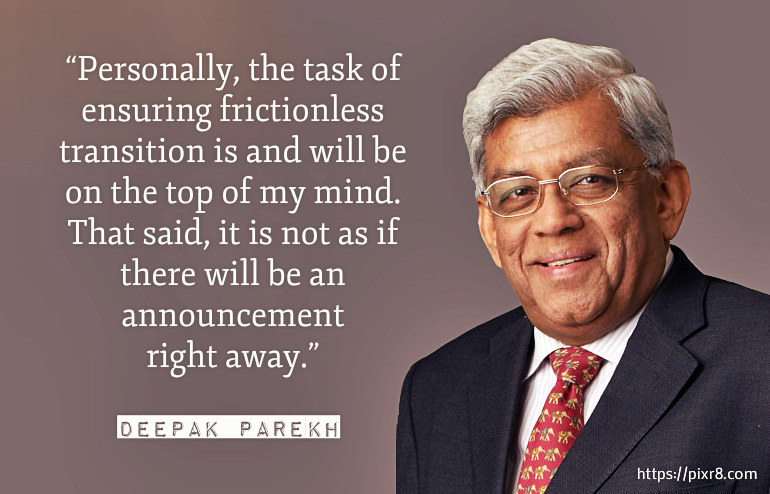 “Personally, the task of ensuring frictionless transition is and will be on the top of my mind. That said, it is not as if there will be an announcement right away,” Parekh said. “As passionate and energetic as some of our leaders within HDFC group are about their jobs, the reality is that individuals do get on in age,” he added.

This is the very first time that Parekh has come up with views on the succession plan in front of the public. Parekh is also grateful to all leaders across the HDFC group for their outstanding work and efforts each day.

“I am confident of the strong pipeline of talent for various functions across all companies within the HDFC group. Yet, positions at the helm require respective board and nomination and remuneration committees to evaluate options of both internal and external candidates,’’ said Parekh.

“Yet, each one of these outstanding leaders stand tall because of their strong and cohesive teams that back them. As for me, I won’t lose sight of the fact that it is the continued support of our shareholders that gives me the privilege to serve as non-executive chairman,” he added.

On future of housing finance in India, Parekh said, “ The growing practice of housing finance players picking loans off each other’s balance sheet needs to be carefully monitored. With regulators prohibiting prepayment charges on most home loans, no one gains in this game except the agent who keeps collecting commissions.”

His statement comes after all the investors are planning succession at the HDFC Bank, and Aditya Puri (the founder CEO) is expected to retire in October 2020. Also, Keki Mistry, vice chairman and managing director at HDFC, received a three-year extension.

Infosys secure $1.5 billion deal with Vanguard, Biggest in its History